When you look at the accompanying plan map, you can see why the results from hole 396 were good, and the other holes didn't really hit much, just a few narrow zone and veins, so we'll ignore them.

When we zoom in, we can actually see that hole 396 wasn't a huge intercept of medium grade mineralization but a series of narrower high grade (>10%) zones within a large zone grading between 2.5-5% Zinc.

Hole 396 was drilled to follow-up on the thick intercepts in holes 333, 334, 335 and 374. When you step back you can see that there are a couple of areas where the mineralization is much thicker than everywhere else.

You can see that there are 2 distinct orientations to the zinc mineralization:

This is important as for accurately calculating the resources you need to model each zone separately, with their own bias to the direction (search ellipse) that the mineralized intercepts are joined together to link adjacent drill-holes. This is important for fault hosted mineralization (the vertical stuff) as the fault zone could be very narrow (a few tens of meters) and very high grade.

Check out the copper distribution: 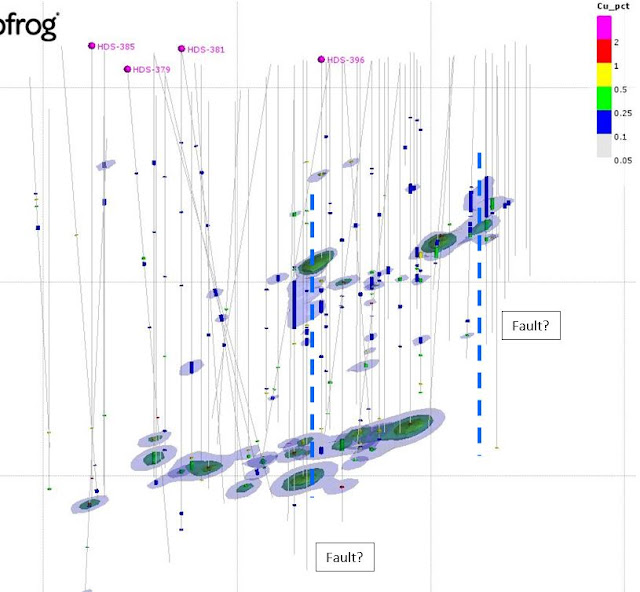 The copper appears to show a bit of zonation. the deeper mineralized horizon is much richer than the upper Zinc horizons, except where you see those nice thick intercepts, is that telling us something? You would expect to see elevated copper in the hotter parts of the system, deeper or nearer the source intrusive, but also where you get zones of weaknesses where fluids will be focused.

In Summary, a good hole, but not an unexpected one. I'll be guessing that we'll be seeing a lot more holes being drilling into this zone over the coming months.

If you want, you can download the 3D model from here (link).

Posted by The Angry Geologist at 10:22 PM