We got results from 2 more drill-holes from Alpala last week (link).

I've plugged the numbers in and this is what it has done to my officially bad (tm) contained metal calculations.

This is some very unfashionable results, normally companies like to drill huge amounts of low grade and amaze everyone with the total contained ounces of gold and tonnes of copper.

So where did these results come from?

Hole 25 was drilled 200m to the SE of hole 19, and below historic hole 13-003 that terminated before it hit the main zone Cu-Au mineralization. It hit a 100m zone of high-grade mineralization from 772-872m but quickly passed into low-grade/marginal material.

It suggests that there could be better mineralization to the NE, maybe an additional hole could be drilled from same platform to the NE? 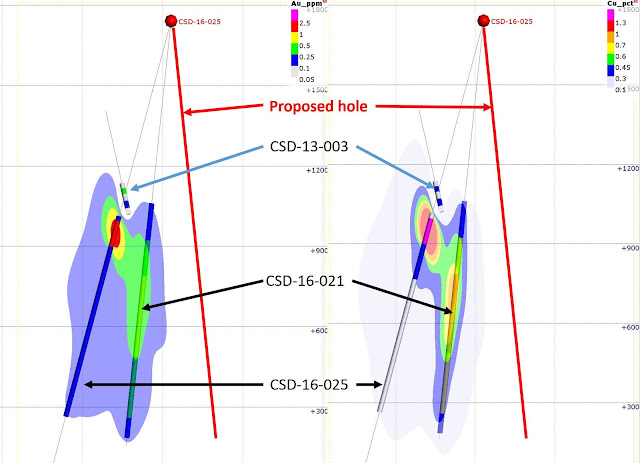 Hole 24 was disappointing, it was drilled 500m to the SE, and hit a narrow (~50m true width) interval grading 0.65 g/t Au and 0.63% Cu, surrounded by very low (<0.2% CuEq) grade mineralization. It looks like hole 24 just clipped the very edge of Alpala mineralization.

You can get the LF viewer file from here (link).

This is just a quick post on the Camino Rojo sale by Goldcorp, who have taken a large write-down, but where there any red flags that undermined the value of Canplat's asset?

Any development of the main (Represa) zone will need to involve Fresnillo. Can Orla do this, or will their focus be on exploring the property for additional mineralization?

Maybe one option could be something similar to Juanacipio. Do a deal where Fresnillo are the operators and Orla can maintain a minor interest?

Camino Rojo is an interesting project, according to the last 43-101 filed by Canplats in 2009 it contained the following resources:

Looking at Goldcorp's Dec 2015 resources (link), the resources have increased significantly to:

That is a decent increase, they've added ~6Moz Au and kept a similar grade, which is good. However, when we look at where the drilling is located, we can see a major issue:

We can see that the deposit runs right to the edge of the property, and we can see an area of drilling in Google Earth on the other side that indicates that Fresnillo have found the continuation!

We can also see to the NE a second area of drilling that suggests that there are other mineralized bodies in the area. So, if there is a deal to be done, Fresnillo won't be selling cheaply as they could be sitting on >5Moz Au!

I imported the Canplats data into Leapfrog (viewer file here), to have a closer look.

So drilling defined an Au-Ag zone that is ~650m thick right next to the property boundary, and then, Goldcorp have spend >$100m expanding those resources.

Why were Goldcorp not able to do a deal with Fresnillo to acquire the adjacent concession? Did they want to much? If that is the case, what chance to Orla have on developing the project?

I still think it is an interesting deal for Orla, but when is the game plan? I see 2 options 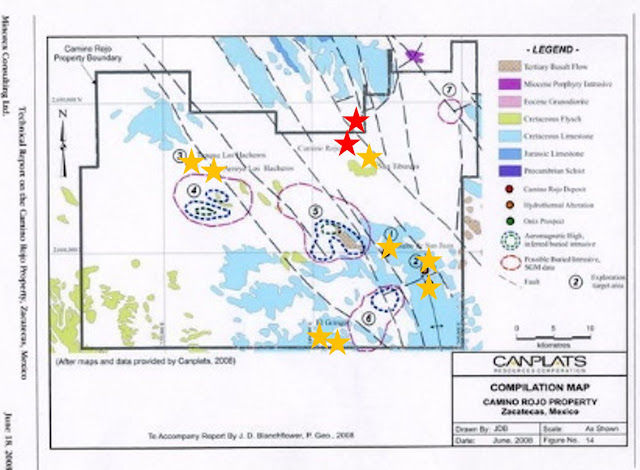 We can see that there are a lot of targets around the property, and a well funded exploration campaign could turn up 2-3 new deposits in an emerging camp.

Posted by The Angry Geologist at 9:53 PM No comments:

Some new results from Tinka, so here is an update!

I've also built up the Leapfrog Model (you can have a look at the 3D views - link), and included the faults from the plan map on the Tinka Website. I want to see how mineralization is related to the faults.

We can see that the best mineralization is found between the 2 green faults. I've drawn a think black line to show what I think is the spine (i.e. the thickest part) of the mineralization.

Why? Did they hit a vertical (chimney) zone of zinc mineralization, or is this upper zone hosted in a small, laterally discontinuous unit of favorable host rocks?

Tinka have been kind and included a map showing where the additional holes have been drilled, but the assay results haven't been released (it does take time to get the samples from the Andes down to Lima for analysis).

Tired if working the traveling sideshow circuit investment show circuit in Canada, the Camino Dream team, got tangled up with raising 5 million loonies, but have triumphantly returned with some core, from driest, sandiest Peru.

Negatives
Positive
I was disappointed that there was such a discrepancy between holes CHR-002 and DCH-001.

We can see that visually:

So, we have 2 holes, drilled right next to one another that have returned significantly different results. I'm ignoring the PR intervals and looking at the individual samples (the colored bars) and you can see that there are significant differences between the holes. Are we seeing sample bias caused by the RC drilling? It may have:
Or, do we have a very heterogeneous zone of mineralization, with significant changes in grade over small distances?

My feeling is that the RC drilling has produced non-representative sample, and for me it will be interesting to see what is reported in the diamond holes.

Here are my annotated notes for this section, just to highlight some important areas.

I'm also intrigued with the Magnetite rich zones. They have been interpreted as being horizontal, but the cool thing with Leapfrog, you can test a variety of ideas.

We can see that there is a significant difference in the depth to the magnetite-rich unit between sections, and the vertical interpretation could be an reasonable alternative, I'm thinking that there could be a series of vertical post-mineral (i.e. after copper) dykes cutting through the project.

You can get the Leapfrog viewer file from here (link).


Just some feedback for Camino, could you get someone to review your PRs before you set them free?
You have some typos, using the wrong units and refer to gold assays in the blurb below the table - or is the AssCu number meant to be gold?

Posted by The Angry Geologist at 4:57 PM 2 comments: