The lowest grade mines in the world - Copper

I've received a lot of requests from people to look at different projects and verify their quality. Some projects are easy (North Bullfrog, San Diego, Cerro Las Minas), they are very low grade, but carefully created equivalents grades calculated from basically any metal content in the rock and assuming 100% recovery.

While I was working on these projects I started to build up a database from actual operations is to try and find the lowest grade mines by:
This will allow you to quickly check the grade from drill-holes and 43-101 resource calculations from your favorite projects to see how they stack up. However, many of these mines have been in operation for a very long time and originally the operations commenced by mining high grade or leachable ores before transitioning to lower grade ores that they are mining now.

I've also compiled a small list of 'development projects' that include mines currently under construction or being presented a project that could go into production in the not to distant future (i.e. we have a PEA or feasibility study).

A challenge for you.

We've recently read that about several resource calculations that have gone astray, so I decided to give you a little test.

Here is a leapfrog viewer file (link) of the gold assays and veins for Dalradian's Curraghinalt deposit.

Your challenge is to pick which intercept is related to each vein specific vein.

It is an impossible task, but the idea is to show that in many deposits the mineralisation isn't typically in a single vein/manto/disseminated zone but is much more complicated.

We, the public, only get a simplified snapshot of the data. This is, for obvious reasons, presented in the most positive way possible.

I'll show you my interpretation if you show me yours!

In my last post on AP I looked at the geology (with some great feedback from Rick Walters (I'm guessing that you aren't the legendary tattoo artist from California).

For the discerning investor it is hard to push beyond the huff and puff in the PRs as every gold project seems to be brilliant. they all have very low costs (cash, AISC), great returns (IRR and NPV), Ana Paula looks to be different, Timmins tell us, AP is:

I worked through the figures to see if I could understand a bit better why the figures for AP are so good, after seeing some nice 'tricks' in the Corvus PEA, I wanted to see if anything untoward was happening with AP.

The short answer - No, but the economic model is probably a little over optimistic. AP is a good project, and IF Timmins don't mess it up, they could have a nice long line of suitors looking to acquire them (e.g. Torex, McEwan, maybe even Tahoe?).


I found some minor issues with the economic model:
One question you have to think about is how will Timmins fund the development of AP?

It looks like they can do it just from the revenue from San Francisco, which is generating ~$12M/quarter (at current metal prices), and they have ~$82M in equity (only ~$12 as cash), so if they are careful and don;t have any issues at SF, then they won't need to raise money by either  diluting the crap out of their shareholders or borrowing money at crippling interest rates.

Timmins have worked hard on reducing the Capex for AP by:


I went through and checked the numbers, and compared them against a couple of other operations and CAPEX values for open pit gold mines in Mexico, and they are inline with other operations.

The only minor issue I found was the way working capital is handled. They have a small amount ($6.9M in year -1), but that is all returned in year 9 (when the mine closes), so it balances out. However it should mean that AP capex should be $6.9M higher at $128.6M.

I also feel that the working capital should cover 2-3 months operating expenses, around $15M especially to cover that tricky start-up period.

Lets check the costs that Timmins are using - how do they compare to operating mines?

And visually
They look OK, there are some differences because:
Nothing major, these costs are good and inline with current (and recently operating) mines.

I've worked in some possible issues into an updated Economic Model to see how they could impact the NPV and IRR for AP.

They bought a second-hand mill from El Sauzal, I know that it will be nicely rehabilitated and probably painted a beautiful shade of yellow and blue (or red or utilitarian grey), and they are expecting to:
So they are expecting to use the plant at full capacity for 360 days a year (I'm assuming it will get days off for Christmas, New Year, Easter, Independence day, and either Revolution Day or Benitio Juarez's birthday. That sounds a bit to perfect, was the plant that good when it was at El Sauzal?
It wasn't bad, it average 350 days of operation per year at peak capacity, so if they maintina the same standard at AP, you would expect them to 2.1 Mt/year.

Mines and mills take time to start operating at peak capacity. At El Limon, they still haven't quite reached full capacity (they are up to 83% of design - link), so will you get a similar 6 month commissioning period at AP?

3. Discount rate.
5% is cute, I like to check the discount value against the interest rates that various loan/financing are being arranged at.

4. Working Capital
In a nice stroke of excel, AP has no working capital in its advertised CAPEX.

So how are they going to pay for the operating expenses for that tricky start-up period while they are waiting to receive revenue from their first shipment of dore? A study done of gold Australian mines shows that it took on average 47 days to receive payment (link), maybe in Mexico it will be quicker, but it would be nice to see Timmins include ~$10-15M to cover this.

My mistake, they do, they have $6.9M in year -1, but like the deposit you give to the bottle shop/off-license/liquor store, when you buy a beer (or IRN BRU) in a glass bottle. When you return the bottle (or in this case - close the mine), you get that money back, errr, 9 years later.

All this data when into an updated Economic Model with the following assumptions:

This isn't my area of strength, but it still shows that Ana Paula is a good project, just not quite a spectacular as advertised, but robust enough to pass the stress test and I do like the fact that Timmins have been conservative with the metal recoveries.

I think this is a good project for Timmins

You almost want to tell Orex to stop drilling as with each new press release the mineralization is smaller and lower grade!

We got some more news from Sandra Escobar (Orex Minerals), again with some nice juicy intercepts from their 3rd phase of drilling at Sandra Escobar.

I was interested to see why Orex committed to drill an additional 3,600m at Sandra before they got the results from the metallurgical studies, that will cost ~$750K and what happens if you get poor recoveries? You've wasted a chunk of money for nothing. Fortunately, there is an answer in the PR

Holes SA-16-041, 042 and 043 are in-fill drill holes in the Main Zone to tighten section spacing to 50 metres. The in-fill drilling was performed at the request of the mining consultants who are preparing the initial resource estimate.

Does this mean that Orex were told to drill more holes as there were some critical questions to answer before a 43-101 complaint resource could be calculated? Maybe it was:
I actually admire this, how many companies would take the opposite approach and find a consultant to calculate the biggest resource mathematically possible and be done with it (hello First Mexican Gold).

I don't know if these 5 holes are the only in-fill holes planned for the 3rd phase of drilling, and the rest will focus on expanding and exploring areas? A nice summary map would help!
Let's look at the results, at first glance they look impressive, but it is important to see how they compare against the results from the adjacent phase 1 and 2 drill holes:

Here is the plan map from the may 31st post 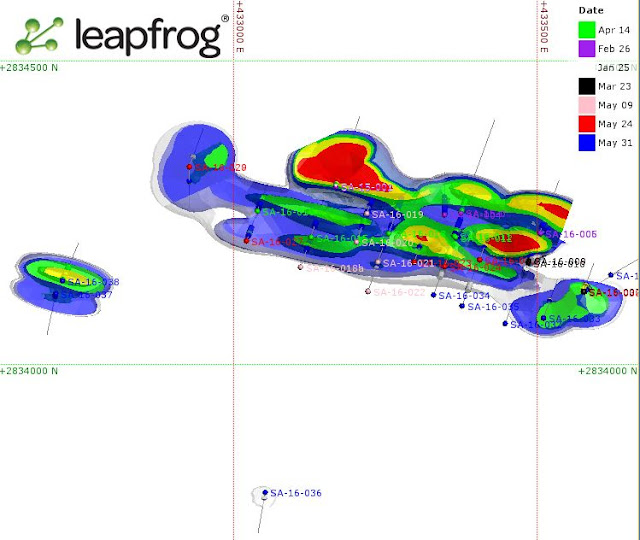 Here is the updated map 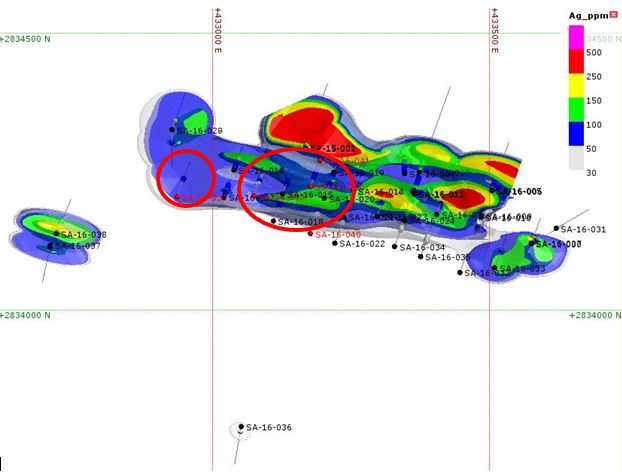 They look very similar, but there are some subtle changes (circled in red)

Nothing special, but what were you expecting from 5 holes?

Let's run through them

These hoels were ok, they were inline with the earlier drilling, but look at Hole 41

Ok, we go from lots of high grade to SFA over 100m. I hope that doesn't mean the high grade zones are localized to a few small areas. It looks like understanding the controls on the high grade mineralization will be key to creating an accurate resource for Sandra.

The other bad news is the mineralization is going deeper as you move to the SW.

Oh dear, a poor hole, I was expecting to get similar results to the holes drilled around it, we got SFA, a 12m silver skid mark and not much else. 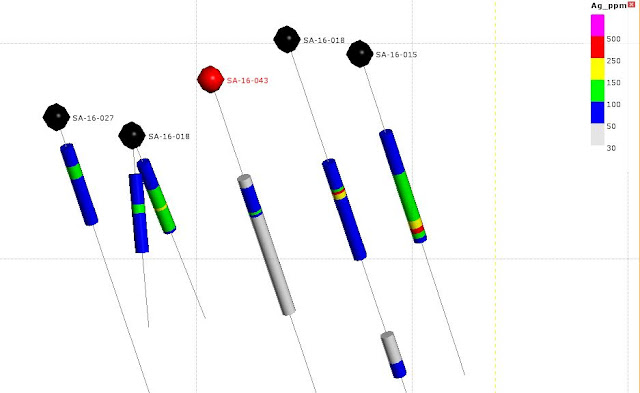 The holes around (they are 50m away) are good, and you would expect that a hole in the middle would give you similar results, but hole 43 contained a lot less silver. This could mean that the majority of Sandra is 30-50 g/t Ag with a few discrete zones of high grade. I'm hoping that this hole is an anomaly and that there is a fault nearby and fluids have removed some of the silver.

It will be interesting to see if any of the phase 3 holes are planned to drill around holes 01 and 02, the 'best' holes, or will they be left alone, undisturbed so that you won't risk reducing the big high grade zone into a series of smaller lenses?


My TAG official crap resource calculation (TM) has been updated and we now have:

I'm using a 30 g/t Ag cut-off, OREX may use 20 g/t in the official (and hopefully not crap) calculation.

You can get the updated Leapfrog viewer file here (link) and look at the data.