Again, following on from the last post about the potential inaccurate grade used for the high-grade zones by Leapfrog in the Nickel Mountain numbers, I've also updated the Alpala resources to include a 2% and 3% CuEq grade shells.

Just a quick update. It was reported to me that my >2% volume wasn't accurately averaging/estimating the grade for this zone.

Thank you to Anon who alerted me about this.

It seems to be a 'feature' in Leapfrog Geo that for the highest grade grade-shell, it doesn't average the grades of the intervals occurring within the grade-shell, but uses the value I enter for the grade shell, in this case 2%.

What I have done is created an additional grade shell at 4% and here is the result:

It does have a big effect on the >2% mineralization. We have the same tonnes, but I think we have more accurate grades for the various zones.

Thanks to the kind person who pointed that out.

As I promised a follow-up.

Here are the questions I asked:

Oh look at that, all of the 2018 holes have been drilled into the Discovery zone, how imaginative.

We also know that Garibaldi have already drilled 21 holes (link) during the 2018 campaign (hole 36 is currently underway according to the PR), but so far we only have the results from the first 8. What is interesting is that Garibaldi haven't included a map showing the locations of the other 12 holes that have already been drilled. I'll let you wonder why....

So we have data for 29 drill-holes (7 historic and 22 by Garibaldi) which I've used to calculate the size of the various sulfide zones. Here is a 3D view (again, the model is here).


I'm only looking at Ni in this analysis as there appears to be an ~2:1 Ni:Cu ratio (I'm working with summary data, so the ratio could be more complicated). 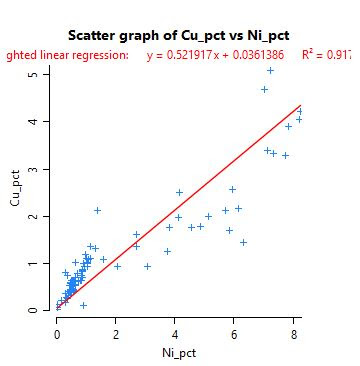 and here you go:

So, it is small and has a veeeeeeeerrrrryyyyy long way to go before it rivals Voiseys Bay (141Mt @ 1.63% Ni), but I'm guessing that the guys at Garibaldi will start to paraphrase Laozi in the upcoming press releases.

We're told this at the top of the section.


Open in all directions, with 29 holes exploring 2 small areas? Did all the holes hit massive sulfide mineralization? Why don't we look in detail.

The next set of figures are quite complicated. I'm drawing a slice through the 2 massive sulfide zones, to see where they are relative to the various drill-holes. 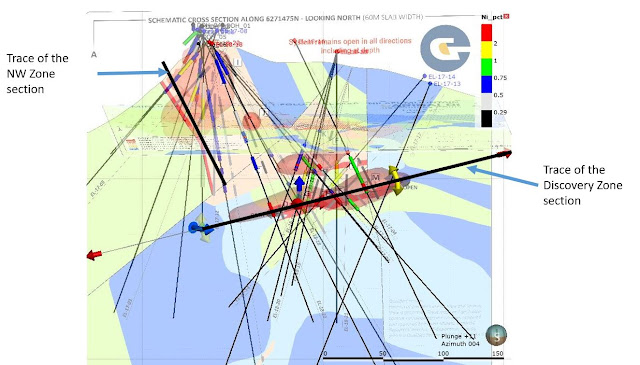 Here is a slice through the main zone mineralization. You can see that it has been well drilled (all 8 of the 2018 holes from the recent PR were drilled into this zone) and the holes are ~25m apart.


I've added a 25m radius around each hole. This helps me show areas where mineralization could be expanded with additional drilling.  We can see a couple of areas that are open, to the west beyond hole EL-18-22 and to the east beyond hole EL-17-10 and 14.

Not quite open in all directions, but they could add a few meters more

Remember, none of the 2018 drill results targeted the NW zone. 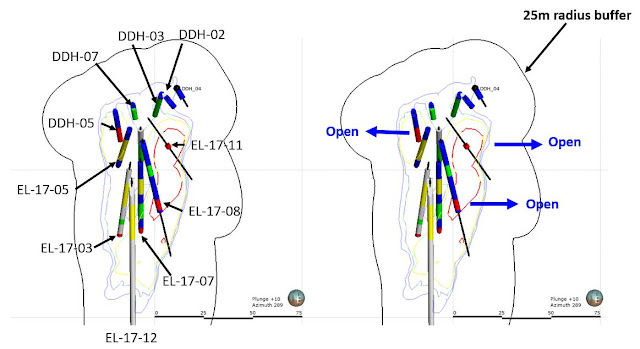 We can see that this zone is open to the North and partially to the south. If will be interesting to see if any of the 13 holes that have been drilled and the results are pending are drilled into this zone. We can only speculate.

Global warming to the Rescue!!!!!

Here it is in all its magnificence: 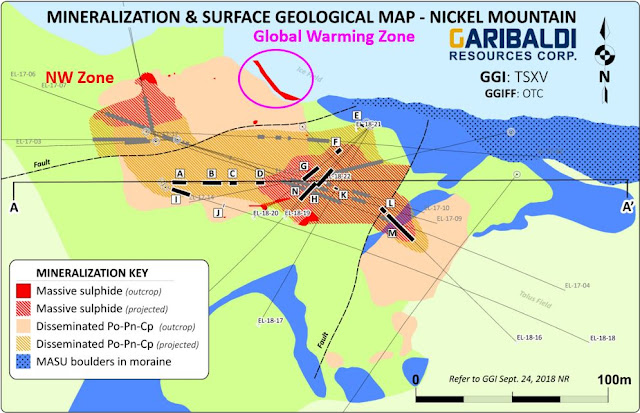 So we have an outcropping 30-40m long massive sulfide zone ~50m north of the Discovery zone. Has it been drilled, we'll have to wait and see.

How big could it be, we can only guess, but based on the fact that drilling has discovered 2 small massive sulfide bodies, and so it is likely that this will be a third, so small and inconsistent.

Everyone loves a good biscuit, but which is better? Rich Tea, Bourbon Cream or a chocolate Hob Knob?

If there are any American readers, Oreos are crap, and Fig Newtons are called Fig Rolls, and Penguins are much better than Tim Tams.

Moving away from the flour-based baked food products, after a rather long time Garibaldi managed to drop a chocolate cobra and publish some drill results.

So all the data has been put in 3D (link) and I want you to download and review the 3D model and check the following:


A bit of a cop out, but I'll write a complete post tomorrow, I wanted people to have a gander at the data first.

Cascabel - after a metric f-tonne of drilling

DISCLOSURE: I own shares in SolGold

Drill results have been spewing from Sol Gold this year and I've been too lazy to bother updating my model, but as people have been irritating me, I've decided to undertake the herculean task of bring in more than 135Km of DH data into some sort of semblance.

I've probably failed, but the 3D model looks pretty (link), and that is the only thing that is important.

Cop-out section: A lot of drill hole information (e.g. final hole lengths etc.) wasn't included in the press releases and on the maps accompanying the recent press releases there are so many holes.


Basically, what I'm trying to say is, take my results with a pinch of salt, I've tried to do the best I can, but I don't know how accurate my model is, so beware.

Before I started compiling the data, I was concerned that the majority of the drilling was focusing on the high-grade core initially defined in 2017 and that all Sol Gold will have done is simply moved a chunk of the Inferred Resources into the Indicated category, which would be regarded as a bit of a failure after drilling so many holes and spending so much money.

In addition, when you pull apart the assays, we see time and time again, that in reality the >1% CuEq mineralization is restricted to quite narrow zones, surrounded by sub-economic (<1%CuEq) mineralization.

Back in January (link) I updated my original model to try and replicate the official SRK resources, and here is my latest version that (tries and probably fails) incorporates as much of the data as possible.

I've been a bit handicapped by the fact that Sol Gold haven't released assays for every hole drilled, just summary results from the best ones.

The changes are moderate:

Just a quick question for people in the mining bizz, this paragraph caught my eye in the Alpala technical report

Hello Silver Viper minerals, how did the drilling go at Clemente?

You mobilized rigs back in October 2017 (link), started the 2000m program a couple of weeks later (link), and since then absolutely nothing, nada, zilch.

ohhh, sorry, my mistake, you've dropped the property (link), were the results that bad? Pro-tip - you probably want to include that PR on the website.

I wonder if we'll see the same with the drilling at La Virginia? You've told us that you have mobilized the rigs (link) a couple of weeks ago, and so we should be having a "drilling has started" PR sometime next week...or are they already turning?.

BTW, if you do get something interesting, please don't repeat your mistake with Orex Minerals and forget to raise money when the share price was high....