Ivanhoe have been finding massive amounts of copper in the DRC at Kamoa-Kakula, but they've just announced a new discovery (link) Makoko.

It was great that they included most of the drilling data in the press release, and from that I have been able to model the mineralization (Leapfrog Model here):

I've also used the data to come up with a resource guesstimate. 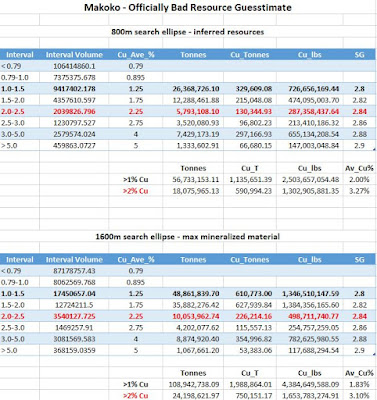 Not in the same scale as Kamoa, but a start.

Assumptions: These are based on the data used in the Kamoa PEA

Specific Gravity: 2.8 to 2.9 depending on the Cu grades (the more Cu, the higher the SG)

You can clearly see that there is a core >4% Cu Zone that appears to be truncated by the Mafic intrusive, but, several wide-spaced holes (>500m apart) appear to show the >2.5% Cu mineralization extending to the SE. 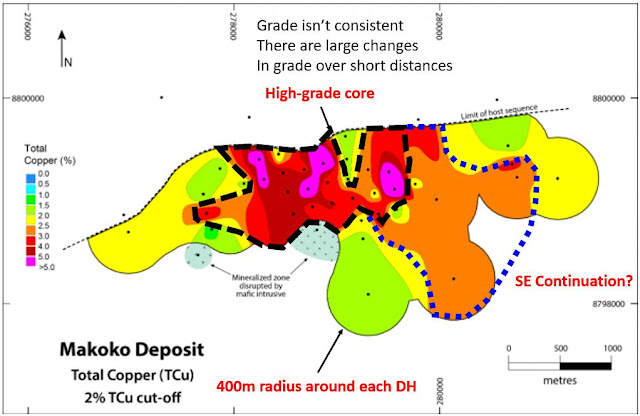 Unfortunately, there appear to be some post-mineral mafic intrusions that appear to truncate the down-dip extension of the >3% Cu mineralization. The  good news is that the at the eastern and western limits of the drilling they are still intersection >2% Cu mineralization over moderate thicknesses (2-5m).

It will be interesting to see if the Cu horizon continues beyond the intrusions, but if it does, it will be at ~700m depths. There have been a few holes drilled up-dip, but they have returned intervals grading <1% Cu.

However, I'm going to guess that my 'estimate' will be low. I've made a few annotations on the plan map above where there is a bit of "artistic license". You'll see how the influence of the low grade intercepts are being reduced to cause the smallest of ripples on the sea of high-grade mineralization that Ivanhoe want to show. It will be interesting if this 'interpretation' continues into the initial resource estimate or if the holes are treated a but more equally.


Posted by The Angry Geologist at 9:23 PM