Some Sugar on you Porphyry, Sir?

Again, all we see is that they are drilling and re-drilling the same zones, it is now starting to get silly. 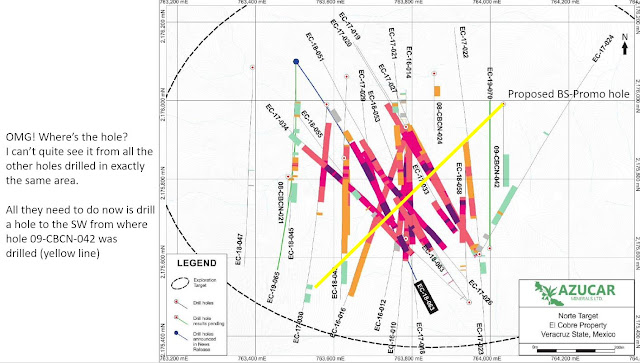 To the surprise of no-one, they got similar results to the previous dozen or so holes drilled into the same area. We do see that holes 65 and 70 are exploring the eastern and western limits to mineralization, but there has been plenty of holes poked into those areas as well. 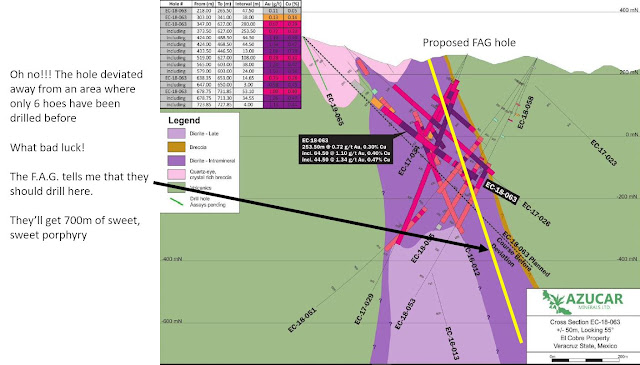 I like the way that they drilled a nice shallow hole to make sure that they reamed the high-grade core rather than drilling below it and potentially adding some tonnes of hypothetical resources.

If we go back to the Feb release, where they did go and drill some of the other targets, all we see is Azucar drilling the known mineralization from a different angle, and getting nothing that is really any good. 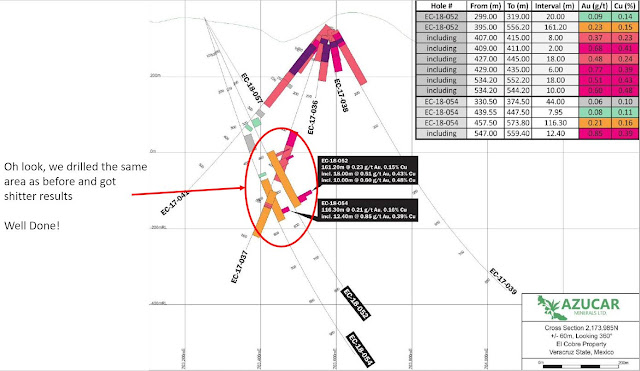 Generally, crap, narrow (for a porphyry) low grade mineralization. No-one in the porphyry world is going to get an erection over 0.2 g/t Au and 0.2% Cu (except for ValOro’s Tepal project where that would be high-grade).

Azucar, you’ve put ~40+ holes into El Cobre, a resource calculation is due, all you are doing now is dicking everyone around. All you are doing is demonstrating that you have a small moderate grade porphyry that isn’t going anywhere. The regional targets are generally crap, and that you re demonstrating you lack of imagination by drilling the same areas time and time and time again.
What a waste.

One thing I hate in exploration is waste. Either wasting time (just by sitting on projects and doing nothing with them) or wasting money.

Azucar are wasting money, they could have easily reduced the amount of drilling at El Cobre by at least 50% (and probably by 75%) and have no meaningful reducing in the quality of information, and will all that extra cash, could have easily put a few holes into some of the other targets that showing in every presentation and press release.

If those targets are any good, why don't you stick a fecking hole in them!

Posted by The Angry Geologist at 5:33 PM