Garibaldi - some results, at last....

Garibaldi, are you ill? The PDAC is weeks away, why did you suddenly decide to release the results from Nickel Mountain (link)?

Here is a plan map showing where the various holes are located.


It would have been nice to for Garibaldi to share with us the rest of the 2018 drill results, but they are still, errm, studying them.

So, without further ado, let's go through the holes:

Note: I'm going to ignore holes (25, 26, 28, 29, and 32) drilled outside of the areas of known mineralization, as they essentially hit nothing. I was intrigued by Hole 29, that drilled one of the famous VTEM anomalies  that Garibaldi had been squawking about for the last couple of years, but they hit nothing. The other reason is, we're not given any real info (e.g. maps or sections), probably because Silver Standard didn't do any work in those areas in the 1960s, about each hole, just a short descriptive paragraph.


Hole 27
This was designed to test the continuation of the NW Zone. The hole hit nothing, even though it came within ~20m of the massive sulfides hit in hole EL-17-08 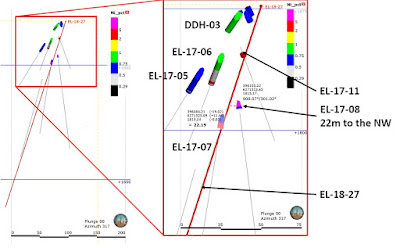 We're told that it was an important hole "to help map out the extent and shape of the Intrusive complex". This is company BS-speak to save face, the hole as designed to hit the NW sulfide zone, but provided invaluable geological information hit nothing

Hole 30
This hole did actually get some mineralization. It hit 3 separate zones of Ni-Cu mineralization.
A zone at surface, which amazingly wasn't seen in hole 33 that was drilled literally centimeters (25 to be exact) from hole 30.
Mineralization, Consistent? Not!

However, it wasn't all doom and gloom. The hole hit a nice massive sulfide zone at 73m depth.

Garibaldi nicely smeared the grade, we actually have a core 3.2m massive sulfide zone surrounded by a 6.5m low-grade halo. We can also see that the hole was drilled just 12m from the massive sulfide hit in drill-hole EL-18-23. So, not a massive step-out. 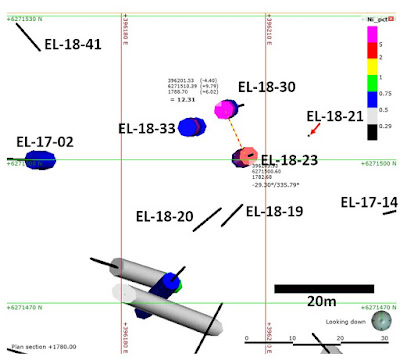 Hole 31
This was drilled to explore for the eastern continuation of the Discovery Zone. The hole was drilled just 40m away from holes EL-17-10 and EL-18-16 that both hit 9-10m of massive sulfides grading >7% Ni, but hole 31 hit nothing, not even a skid-mark. This shows how discrete the mineralization is. 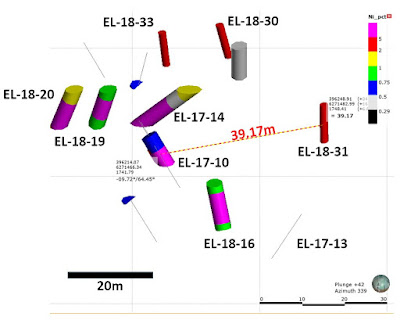 Hole 33
The 'good' hole. This as drilled to explore for the northern continuation of the massive sulfide zone lower discovery zone.

When we look at the various sections we see that Hazelton group occurs as small, irregular pendants and blocks within the large Nickel Mountain Gabbro complex. Through all of this we have the sub-vertical E&L intrusion emplaced. 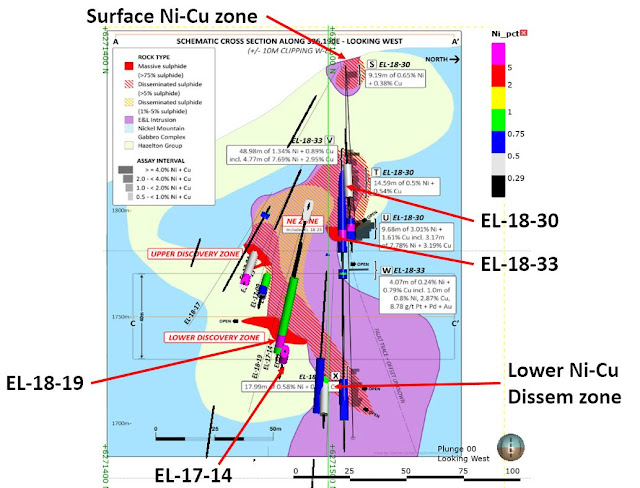 We can clearly see that the mineralization occurs at the contact between the E&L Intrusion and the Hazelton group, i.e. 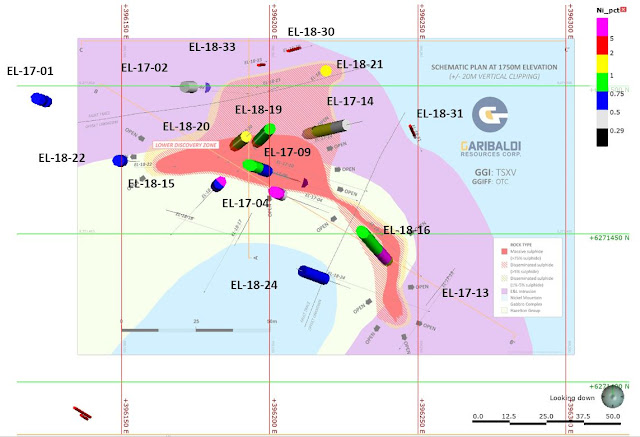 I still think this is because the Hazelton group is contains Sulfur in the form of pyrite (hole 29 supports this). The E&L intrusion is Nickel rich, but sulfur poor and therefore can't precipitate Ni in the form of Pentlandite (an Iron Nickel Sulfide - formula ~FeNiS).

So we have, highly irregular contact between two small rock units that have formed a few small, high-grade irregular pods. Not exactly a geological situation that lends itself to forming a large deposit.

Posted by The Angry Geologist at 8:30 PM