Nothing special, nothing new, but after 4 months of waiting, Garibaldi have manged to publish the results from the final drill holes at Nickel mountain (link).

We get a smattering of regional exploration holes (all hit nothing), some hole exploring the new (i.e. not found by Silver Standard in the 1960s) and some nice promo-BS holes drilling down the guts of the NE and NW zones, which, I'm guessing weren't as good as expected and would have had no impact on the releasing the results..... 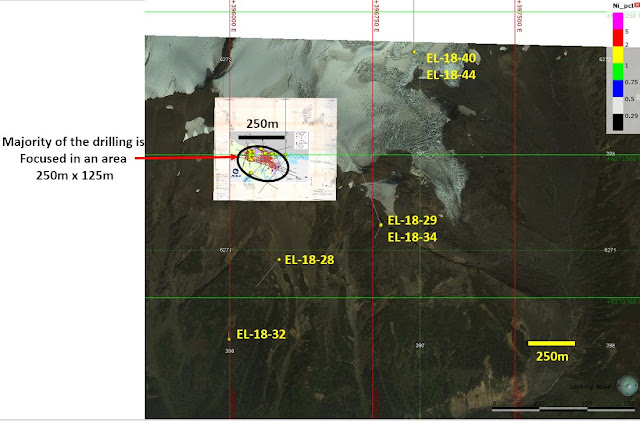 I'm only going to focus on the holes that were drilled in the NW and NE zones. A few holes have been drilled regionally, but they hit nothing, so we can forget about them. However, it would have been nice to have known what the holes were targeting (and maybe which geophysical anomaly), but that isn't the way that GGI operate.

You can find my Leafrog model here and I've also incorporated the surface samples form the Crevasse massive sulfide (link).


Hole 36
Drilled to explore for the southern continuation of the NW zone, it intersected a 42 cm zone of massive sulfides just 17m south of the DDH_05 drilled by Silver Standard in the 1960s that intersected 9.5m @ 2% Ni.


Hole 46
Unsurprisingly with the poor results from holes 36 and 37, the final hole in the area (and the 2018 program) was a nice BS-hole, designed to drill right through the guts of the mineralization to get as long an intercept as possible.


The irony is, the hole did hit a wide zone of <1% Ni disseminated mineralization, but no high-grade and actually returned lower grades compared to adjacent holes (EL-17-05, 17-06,  and DDH_05).


I'm grouping these zones together as they all appear to be part of the same system. 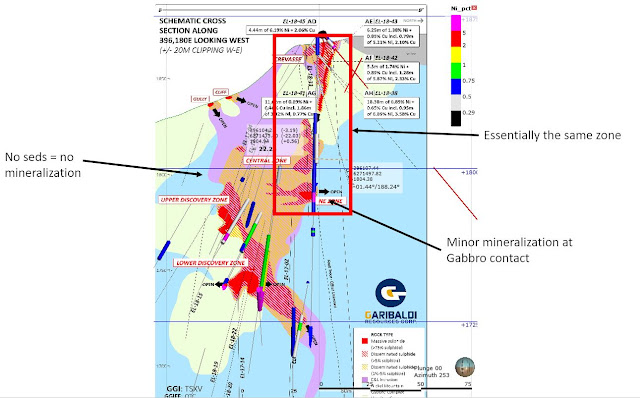 We see that the massive sulfides are found at the contact between the E&L intrusion (purple) and the Hazelton sediments (lime green), and by some amazing fluke (GGI would never have deliberately designed them to be to be BS-promo holes) all 5 holes have been accidentally collared right in top of the of the mapped massive sulfides.

Unsurprisingly, all holes hit mineralization at surface, with each hole hitting a narrow (up to 1.5m core length) massive sulfide zone with minor (up to 18m) disseminated mineralization.


With nearly 40 holes drilled into an area that measures 250m by 125m, I am keenly waiting for GGI to commence a resource calculation for Nickel Mountain. I'm sure that they have enough information.


Joking aside, basically we see nothing new, the mineralization is restricted to small zones, there are areas where it can be expanded, but they are limited (and not everywhere as shown on the plan map accompanying the press release), but you need to remember:

Why is this important - if GGI haven't rocks similar to the E&L Intrusion elsewhere on the property, then potential to discover additional mineralization is essentially zero.

Note - for the pedants 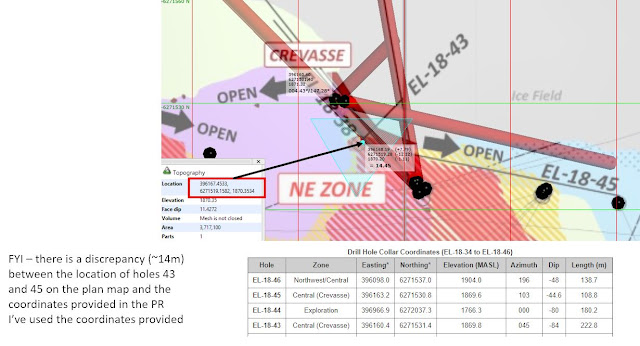 Posted by The Angry Geologist at 9:30 AM