Sun Metals - Stardust in Central BC

There are very few 'new' discoveries being made, and most junior explorers are flogging dead dogs that have been around for such a long time that most you can ignore.

This was my initial opinion of Sun Metal's Stardust project, it had a tiny resource but has had a lot of work done on it, ~398 RC and diamond holes, or ~70Km of drilling.

What a POS - a small, low-grade, well explored project in the middle of nowhere. The didn't seem to be much potential in the existing resources. They appeared to consist of a series of narrow, variable grade zones that have had the crap drilled out of them.


So where were Sun Metal's going to find more mineralization? Projects like Stardust are quite common for it to go any further, you want to see some potential that it could host resources around >10Mt @ >3% CuEq to get a mid-tier miner (e.g. Crapstone) involved.

I'm just focusing on the skarn mineralization. I know that the project has several other mineralization styles, but they aren't the focus on the technical report, which suggests that they aren't important economically. You can get the 3D model from here (link), there was only a small proportion of the historic data that I could get in. 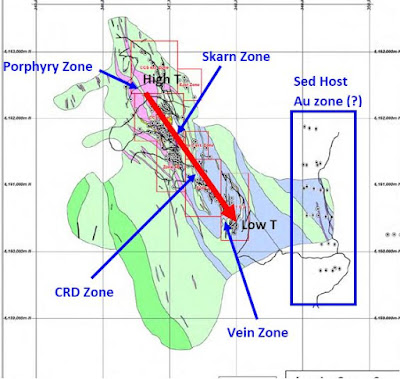 For those getting massive erections from the Porphyry zone, it has been drilled and no results are mentioned in the technical report, so I assume that it is unmineralized, but the lack of mineralization in it could be:

However, the recent drilling (link and link) did look interesting. I wanted to check that they were doing more than confirmation drilling, i.e. twinning good old holes to con people into believing that they had found something new. 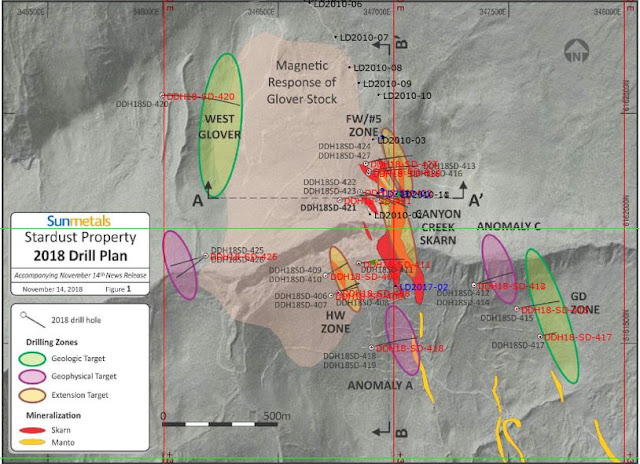 Simply put, they did a bit of both. Tested the known zones (probably because the historic core is missing), and they tested a few geophysical targets.

The good news that came out in October was from a confirmation hole (i.e. one that was drilled into an area that had been drilled before), and we got this section. 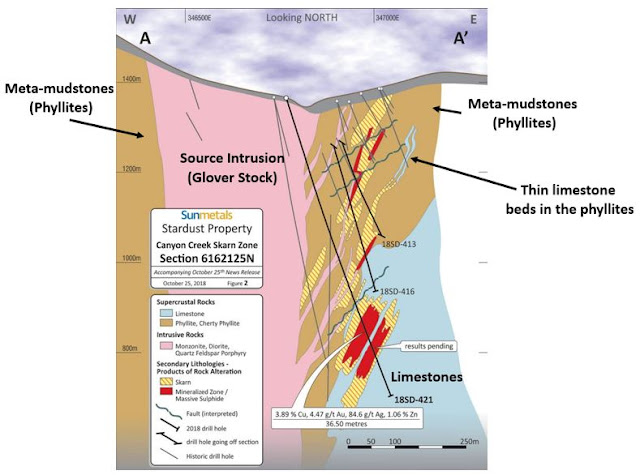 We can clearly see that the majority of the skarns are hosted in narrow limestone units within the phyllite package, which explains the narrow, irregular nature of the resources, which is not a good situation if you want to find a big deposit! 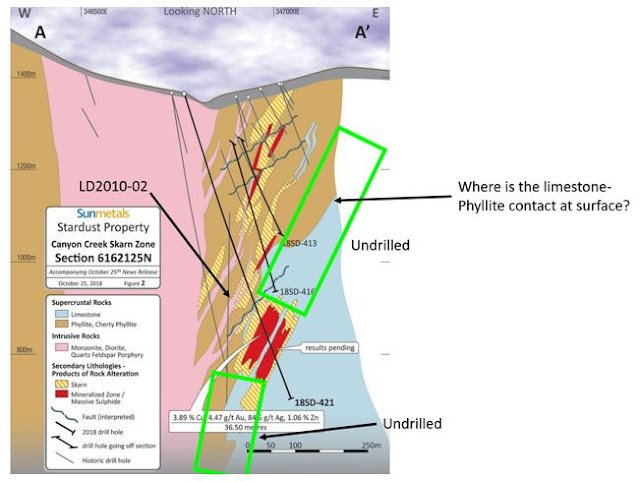 However, drill-hole 18SD-421 was good, it drilled through the phyllites and passed into the underlying limestones where it intersected 2 previously unknown, thick, high-grade skarn/massive sulfide zones.

This is great news as it shows that Sun Metals has found something new, rather than rehashing old news, and it appears that this phyllite-limestone contact is virtually undrilled! This zone appears to be open in most directions, especially up-dip.

The down-dip potential could be limited by hole LD2010-02 that may have drilled the down-dip continuation of this zone but hit nothing, but the hole may have been terminated before hitting the mineralized horizon.

I don't know the ground conditions at Stardust, but maybe there is an opportunity to reenter and extend holes 013 and 016 to drill through the phyllite-limestone contact as this would allow them to quickly determine (in 2D) the orientation and up-dip extent of this new skarn zone.

In summary, Sun Metals have a well explored project, but the discovery by hole 421 has identified a new target that has returned the highest-grade and thickest skarn intercepts on the project. However, with just a single hole intersecting this zone it is very hard to determine its size potential.

In addition, they may want to look at conducting a down-hole geophysical survey, for example Mise-à-la-masse that has been used successfully in many other polymetallic sulphide deposits to determine its lateral extents.

Posted by The Angry Geologist at 11:37 AM