The market hasn't been impressed with the recent results from Saddle North.


and nor was I, but I've updated the Leapfrog model with the new data (link) so you can see everything in 3D.

The new drilling was disappointing. It appears to severely restrict the size of the high-grade (>1% CuEq) zone to an area that is ~500m long by 150-250m wide.


The good stuff starts at around 250m depth, and the stuff above is quite poor, generally less than 0.25% CuEq, which isn't something you want to be mining and 1000+ meter holes are expensive to drill.

Hole 102 is easy to explain, it cut the periphery of the system and got a bit of copper and gold, and helps define the NW limits to the system.

However, Hole 98 was disappointing, it was planned to go through the guts of the system below hole 85 and hit not much at all, just a narrow deep zone of decent mineralization surrounded by low grade. We could explain it as clipping the SE edge of the system, but that is an impressive drop in grades over such a short distance, especially as there doesn't appear to be a fault or change in rock type.

Could it be that there is a preferred orientation to the mineralization? 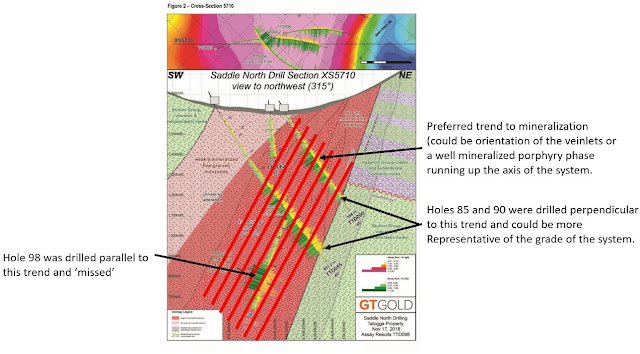 There is some evidence in the core photos to support this, but I have to admit, the photos aren't very sexy.


I also did a woeful calculation of doom (TM) to see potentially how much metal the system could contain.

If it was closer to surface, I think bigger companies would be having a look, but at depth, at those grades, probably just going to be ignored.

My observations for the pending holes are:


Maybe GT Gold will be lucky and find another couple more porphyries, but my overall feeling is that we've seen the best from Saddle North.


Posted by The Angry Geologist at 6:19 AM