Note: I'm going to using NiEq% grades using a ratio of 3.2% Cu = 1% Ni.
I haven't included any of the other metals as the PGEs, Au and Ag don't always appear to be associated with the massive sulfide intervals and as I don;t know their recoveries, I don't know if an economic amount of the metals will be recovered and paid for by any smelter.

To no surprise, all of the holes are drilled in the same 300m x 200m area that we've all come to love

You can get a 3D model from here (link)

Drilling has focused in 3 main areas

Seven holes were drilled into this zone to see if the massive sulfides in the NW zone link up with the sulfides mapped at surface in the NE Zone. 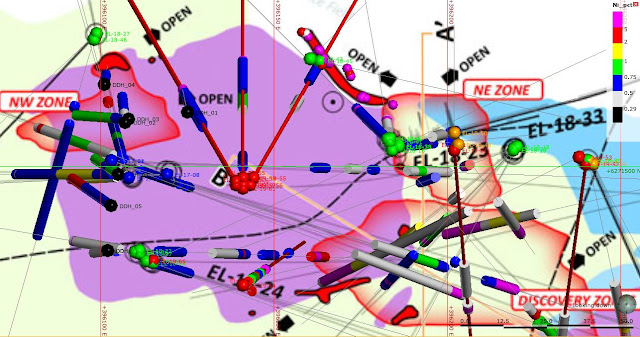 You'll see that the surface sulfides are found at the contact between the E&L Intrusion (purple) and the Hazelton Sediments (light green), 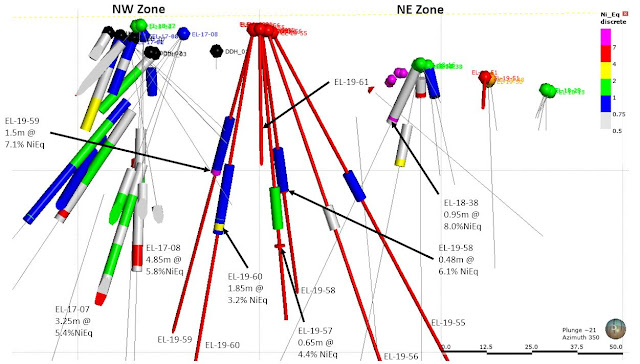 On the section that the holes generally hit a narrow massive sulfide zone with a small (up to 15m core length) zone of disseminated (<1% NiEq) mineralization above it. Holes 55 and 56 didn't hit any massive sulfides, and suggests that the system is dying to depth in this direction. 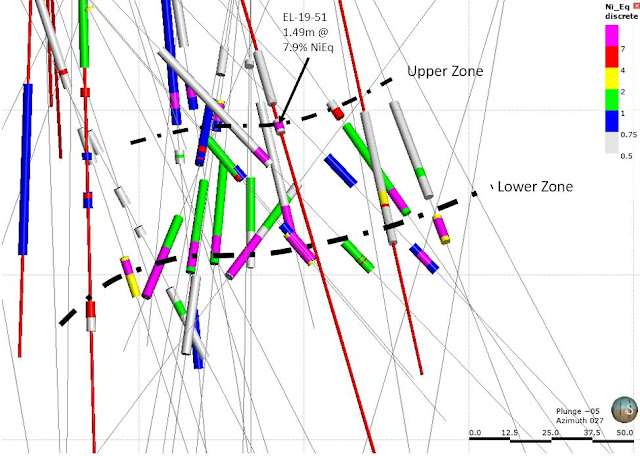 Here is a long section through the lower/main Discovery zone, I've clipped out the spurious information 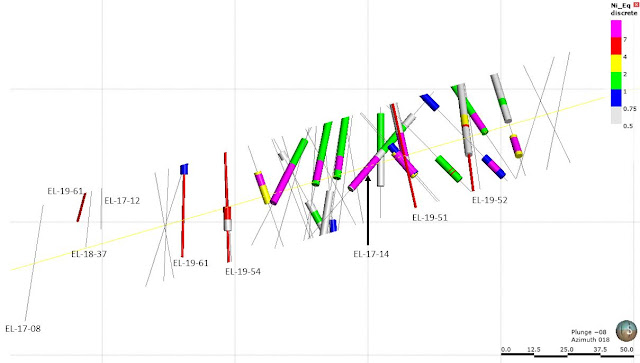 What is also interesting is that holes 17-12, 18-37 may not have been drilled deep enough to intersect this zone. Maybe there is a (small) chance that Garibaldi could re-enter these holes and drill them an additional 50m to check. 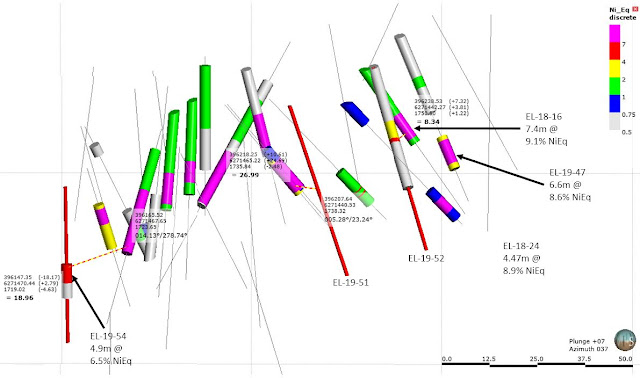 Here is a plan map of the Lower Sulfide zone. It is a busy figure 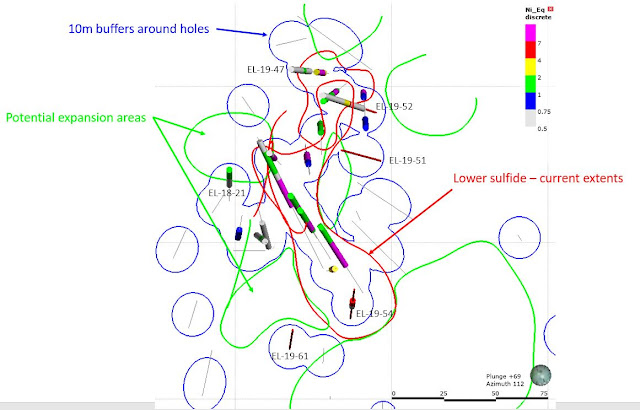 The known sulfide mineralization i about 130m x 30m and if it is 8m thick, we get:
Still very small, to get a 1Mt deposit, at similar thicknesses we need a footprint of
It is small!

Drill-hole 51 hit a narrow zone of massive sulfide mineralization ~25m above the Discovery zone. It seems to line up with other massive sulfide occurrences in early drilling. 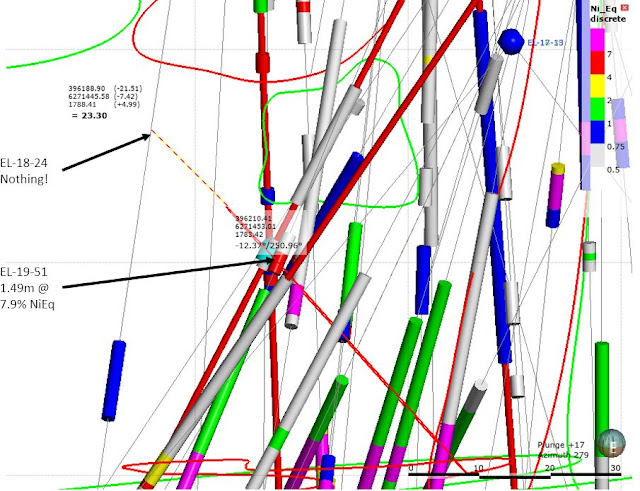 However, drill-hole 18-24 didn't hit anything on the up-dip continuation of this zone, so suggests that it is a small, localized sulfide body. 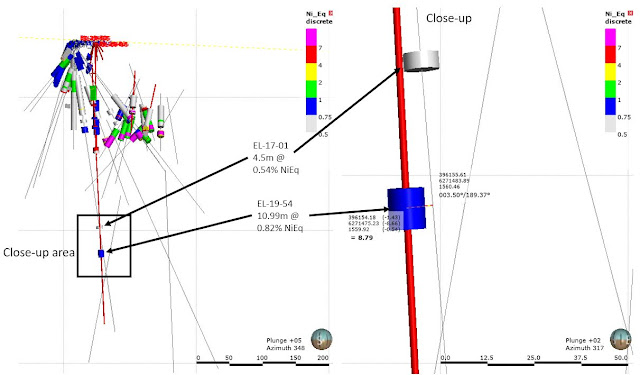 It got a 10m zone of <1% NiEq, but nothing special. This hole was drilled to follow-up on the small zone hit in hole 17-01 (they are ~10m apart). Personally, I think that rather than being a feeder zone, what we may be seeing is the effect of s chunk of Hazelton Group sediments in the Nickel Mountain Gabbros that, due to a change in local chemistry, has led to the local precipitation of sulfides from the gabbros.

We can see on the section accompanying the press release (link) that there is a close spatial relationship between the Hazelton group and mineralization. 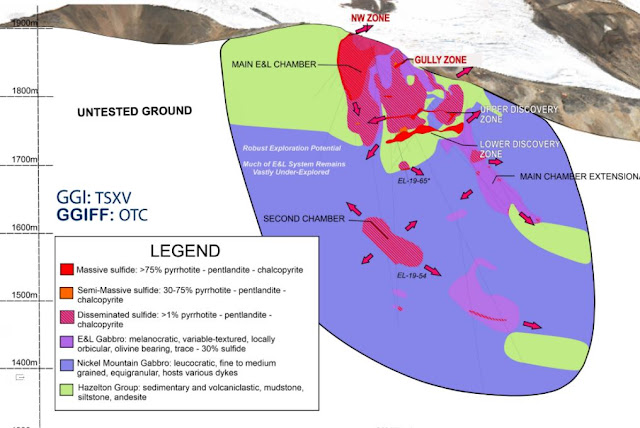 However, most of these points are rhetorical, to me, I can't see the evidence from the drilling that supports a big Ni sulfide system at Nickel Mountain.

I did an update to the Officially Bad Resources, make of them as you want

Posted by The Angry Geologist at 2:45 PM