Some updates to correct for some inaccuracies, and to update the resource table to include additional information.

And now for something completely different...

I wasn't expecting the Spanish Inquisition over Nickel Mountain.


Back to reality, Nevsun have been releasing some great results from the Lower Timok Zone (link), we can see on the accompanying plan maps and sections that this zone is large, but deep.


You can clearly see the footprint of the Lower Zone, with approximate dimensions of 1.5km wide by ~1km. To the south, we can see the smaller, but very high-grade Upper Zone.

So we can see that the Lower zone extends from 800m to ~2000m below surface. I've added some annotations.


We can see that there is potential to extend the known mineralization to depth, and maybe to the West, where no deep drilling appear to have has occurred beneath the Upper Zone.

However, I commented in previous posts that one of the problems at Alpala was its depth. The initial drilling didn't appear to outline a resource that was sufficiently large or high grade to support the development of a stand alone, large-scale, underground operation. Do we have the same issues at Lower Timok?

I've compiled as much data that I can find for Lower Timok, and I've also included the recent (2016-17) drilling from the high-grade Upper Zone as well, just to allow you to compare their location, depths and relative sizes.

You can download the 3D viewer file from here (link).

The first step was to evaluate the size and grade for the Lower Zone. I created a series of grade shells for Au, Cu and CuEq (I used Nevsun's CuEq calculation 1g/t = 0.7% Cu). These are all included in the Leapfrog viewer file as well as all the sections from the December 4th PR.


Here are the assumptions I used to create the grade shells in Leapfrog Geo:

Here is an updated "officially bad estimates" (TM) for the Lower Zone: 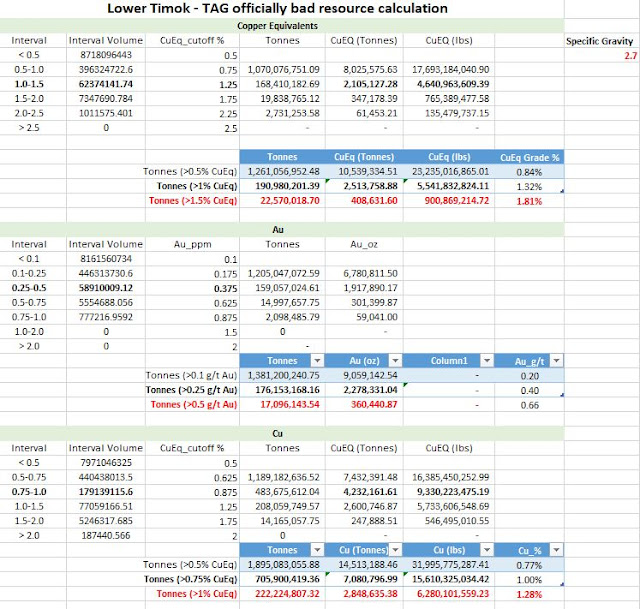 Just a couple of observations:

At the bottom of each table I've given a tonnage and grade at various cut-off limits. I'm going to use a 1% CuEq in the following section.

If we compare my 'resource' CuEq grades and plot them against the Macquarie Reseach report on large-scale underground porphyry projects. 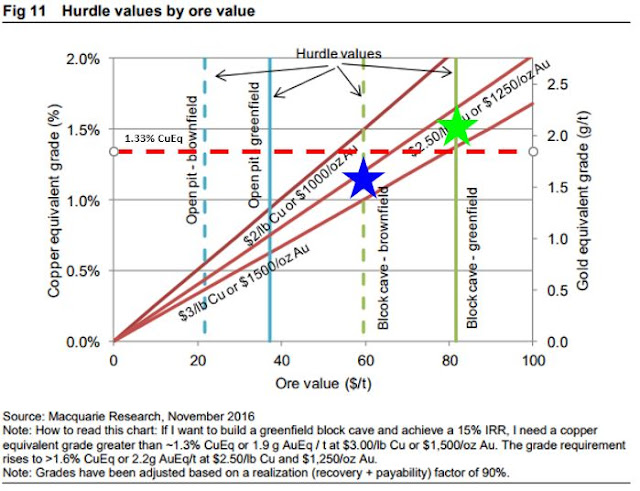 We can see that Lower Timok isn't quite good as a stand alone greenfield development project, but as it is adjacent to Upper Timok, with a quite robust PEA, we can considered Lower Timok to be a brownfield project, and now we see that it is high enough grade to pass the Brownfield hurdle grade.

However it isn't quite as simple as that. If we look at the recently released PEA from the Upper zone (link), and we are told:

If we compare this to Stage 1 for Wafi-Golpu project (link), which I think could be a good analogue to the hypothetical costs to develop Lower Timok. 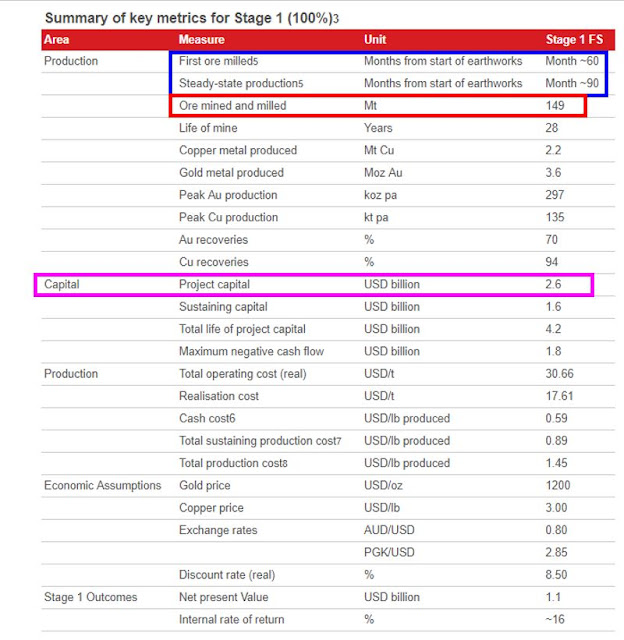 You can see that I've highlighted some important values.


So, if Nevsun were looking to develop the and mine the Lower Zone, it will require significant additional CAPEX, larger milling and surface facilities (tailings and waste dumps) than proposed for the Upper Zone mine. This means that Lower Zone is a half-greenfield half-brownfield project - I'll call it an Olive Project, and that Nevsun have a couple of options:


This is my hypothetical scenario for Lower Timok


At the moment, there aren't a huge number of drill-holes into Lower Timok, and the drill hole density is still quite low (approx. 300-400m between drill-holes), but the initial data shows a robust porphyry system, that is open in a number of directions.

The initial (i.e. very bad) review suggests that it could support a medium-sized underground operation, but its development is dependent on the economics of the Upper Zone and how Nevsun/Freeport decide to develop the Lower Zone.

Will Nevsun just focus on the Upper Zone or will they factor in the development of the Lower Zone into their future decisions for the project?

For investors, the upside could be, that if the Lower zones becomes significantly larger (e.g.>500Mt at similar CuEq grades), would Freeport step in and take out Nevsun to consolidate their ownership of a large porphyry Cu-Au deposit not owned by a major mining company?


Posted by The Angry Geologist at 6:16 PM