Pro-trick for Garibaldi - if you are going to put a table in your press release, don't include a sub-interval that is lower grade, it just shows that you are smearing a very high grade zone over the thickest interval possible.

It is also obvious that this intercept is not close to true widths as suggested below the table, but it shows that Garibaldi thought that the Discovery Zone was parallel to the upper sulfide zone intersected by holes EL-17-04 and 09 and dipping approximately to the NW.

This means that hole EL-17-14 was orientated to drill down the guts of the Discovery zone to try and get as long an intercept as possible, so here is my very simple interpretation, based on the intercepts in holes EL-17-14 and EL-17-09.

It looks like the Discovery zone is ~10-11m thick, based on the >2% Ni assays and reported massive sulfide mineralization.. This is significantly less than the 16.75m than Garibaldi are suggesting in the notes beneath the assay table.

I've brought the data from hole EL-17-14 into Leapfrog and created a new model (link), I've also done some officially bad mineralized material calculations (TM) to get an idea of the size and potential at Nickel Mountain, to see how GGI can justify a ~CND320m market cap.

Here are my assumptions:

If we compare Nickel Mountain, with the best-est-ist grades in the wurld, to the Eagle Deposit.
Eagle was acquired by Lundin Mining in 2013 for US$325M (link) or CND$416 (at current exchange rates), which is only CND$100m more than Garibaldi's current market cap.

Why? There are only 14 holes drilled at Nickel Mountain, no resources, and the massive sulfides appear to be narrow, and inconsistent. Before you hurl abuse at me, just take a step back and ask yourself - what does GGI have to warrant such a high valuation?

I also can't see the upside potential, and I don't like that GGI have been very poor at releasing quality data for the project (you could think there is a reason for this). We still have no plan maps, no geophysical sections, no presentations etc. This isn't something you would expect from professionals running a professional company.

I've also included some scenes showing my interpretation of the various sulfide zones and their orientations that I can determine from the limited data available. I've split it into 4 separate zones, as I was intrigued by this statement.

Here are the various massive sulfide zones, I've decided to label them, as Garibaldi can't.

Using the data provided, I've created a series of estimated trends for each zone. 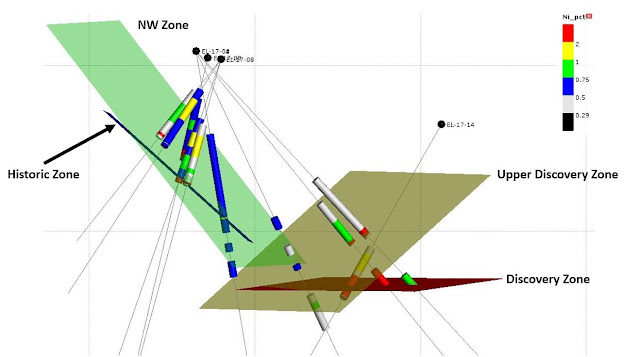 To create these trends I lined up the various massive sulfide/high-grade zones in 3D. It was fortunate that Garibaldi don't label these zones on their cross section or in the drill intercept tables.

I apologize to any non-technical readers, the following section is going to be full of geo-wank. I've included some features on the sections through each zone:
The distance contours show me where drilling has and hasn't occurred and is useful to identify areas that have and have not been drilled.

This is the zone that Garibaldi have been getting erections over, discovered by hole 09, but only recognized 5 holes later.

This zone appears to be almost horizontal, intersected by holes EL-17-02, 04, 09 and 14, but only holes 09 and 14 hit significant sulfides and mineralization. 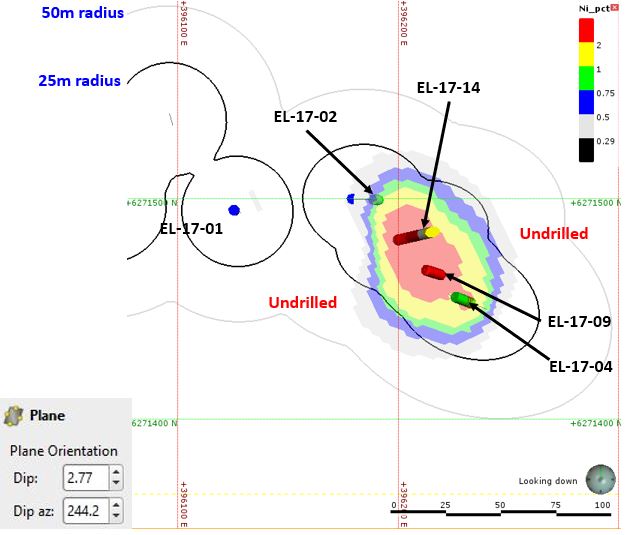 This zone has been well drilled, it sits above the Historic Zone and appears to be steeply dipping to the SE. 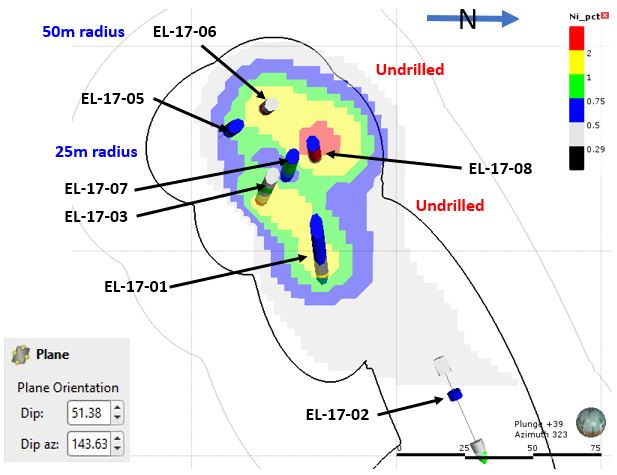 Note: this section is orientated with north to the right.

So this zone is closed off to the south (left) with the drilling intercepting narrow >1% Ni zones. However, it is open to the North (right), with hole EL-17-08 intersecting ~6m of massive sulfide mineralization, so again, there is potential to expand this zone with additional drilling.

This is where exploration occurred in the 1960s. It has been well drilled by Garibaldi. To date 6 holes have drilled through this zone, but only 2, EL-17-03 and 07, have returned decent grades. It is closed off to the west by holes EL-17-05 and 06 that were unmineralized. To the north by hole EL-17-08 (unmineralized), and to the west by hole EL-17-01 that cut disseminated mineralization.

However, there is minor potential for this zone to continue to the NE, but the drilling by Garibaldi show that it is very small 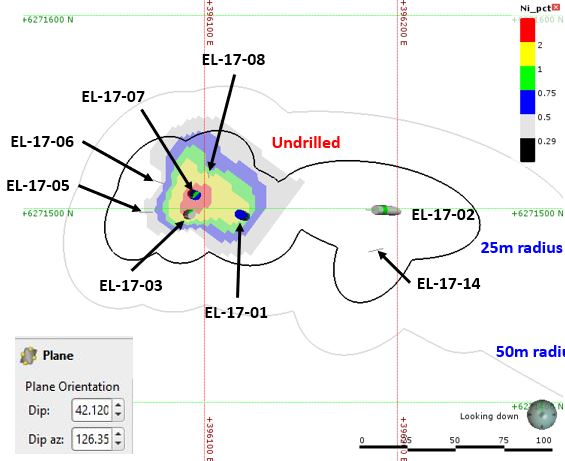 So, all I can see is that the sulfides are small, have very variable thicknesses and grades over very short distances, but each zone is open in 1 or more directions. It will be interesting to see where holes 10-13 are located (I'm surprised that they were not able to release the assays from these holes as they were all drilled before hole 14 - could there be a reason - i.e. they are shite), if they are in the same Section, then, for me it just means that even Garibaldi knows that they are small and focusing on this small zone as it is the only area with evidence for massive sulfide mineralization.

Posted by The Angry Geologist at 11:59 AM