The Valleys are full of crappy copper deposits......

Vizcachitas, the "Largest Independent Copper Project in the Americas" we are told by Los Andes. All that is missing is "undeveloped", to really tell us how great the project is!


All projects are great from afar.....

*resources haven't been updated to include the 2015-17 drilling.


DISCLOSURE: I've compiled as much of the information as possible that is in the public domain. However, I've had to estimate the angle of dip, and I'm sure that I've only been able to find summarized assay data for ~65% of the 'deposit'.

You can download the Leapfrog project from here (link)


The first area I wanted to look at is the quality of the resources, especially the tonnage at high, medium and low cut-off grades.

So we can see that the majority of the deposit is very low grade, and a small part (only 19%) of the indicated resources scraping over 0.5% Cu.

However, the recent drill results have been interesting (link) with some (reported) thick, reasonable grade intercepts, but we need to check where these holes have been drilled (link). 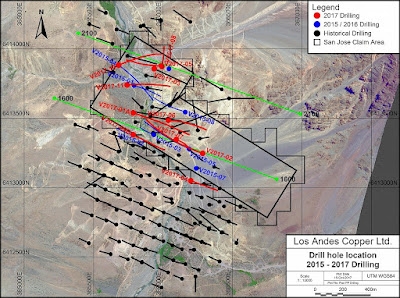 You can quickly see that the majority of the new holes are clustered in areas of known mineralization, with a couple, including hole V2017-10 drilled to the north.

In the image below I have created a >0.4% Cu grade shell for the project using (left) pre-2015 drilling and (right) all drilling. To see how the resource has changed.

There is a new area to the north, centered on hole V2017-10 and some minor expansion around the edges of the known mineralization. There are no new high -grade zones, and when you look at it, the >0.4% Cu grade shell is quite poddy and doesn't form a nice solid consistent zone with a high-grade core.

Here are some sections, you'll notice that the >0.4% Cu zone doesn't extend to great depths. 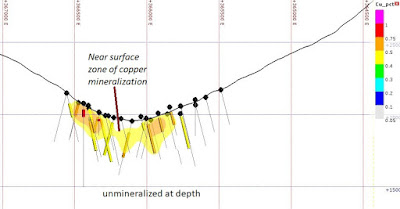 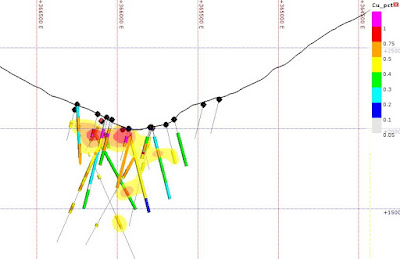 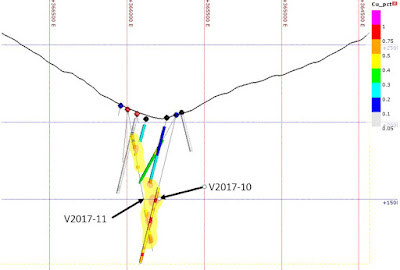 These zones aren't very thick, but we can see that the mineralization in Hole V2017-10 is open in several directions, but is deep, all other mineralized zones appear to have been close off or are very narrow, so unfortunately, I can't see much exploration upside.


There are rumors that Los Andes want to re-market Vizcachitas as a small (40,000 tonnes per day), high grade deposit, and we are fortunate that a financial analysis of a 44,000 tpd operation was include in the 2014 PEA.

I mean, I like the fact that they are so modest, a discounted NPV of just US$3 million is quite cute when compared to other large copper projects, and a leisurely payback period of a decade, I mean why make money quickly, when you can make it slowly and savor it.

I mean look at the numbers, all the best projects, like Livengood's epic 2013 PEA, you have a positive IRR and a negative (discounted) NPV.

It is going to be a lot of fun developing such a marginal project, where any minor increase in CAPEX or OPEX with rape you up the ass. Personally, I can't think of any mining project that has every gone over budget or not completed on time.

One the cross sections above I put on the surface trace. It shows that the mineralization is found at the bottom of a steep valley, that Los Andes loves to take photos of: 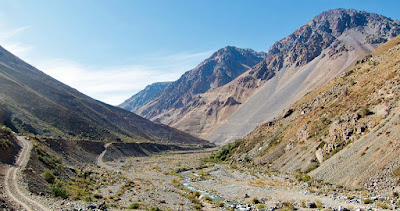 So, it is a bit hilly, has a river than runs through the project (that hopefully isn't a water source for any urban centers), so another factor that will impact the economics of the project is the pit slope angle. Back in 1999, Golder estimated a 42-47 degree angle, and I've doodled it on the best section, along with steeper and gentler angles 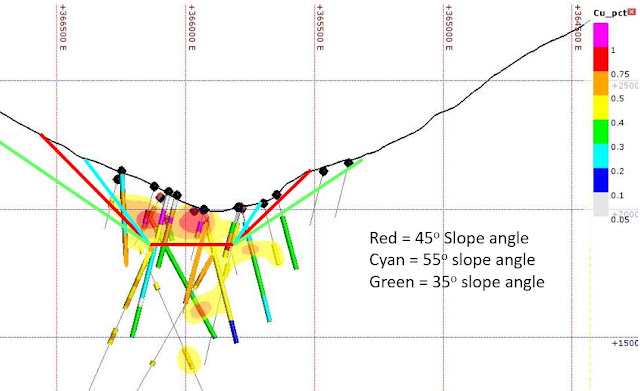 You can see how much additional rock (grading less than 0.4% Cu) needs to be moved.
The same will happen if you decide to mine the deeper resources, as you go deeper you needs to move more and more low-grade waste rock on either side of the deposit. 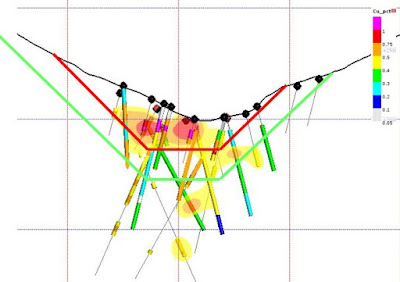 So, after all of this blathering, you can see that the project simply isn't good enough, the economics are crap, and just a minor change in CAPEX, OPEX, metal prices, rock quality and stability can conspire to wreck it. The recent exploration data hasn't shown any upside, just a single hole that hit some medium grade mineralization at depth.
Posted by The Angry Geologist at 8:20 PM