DISCLOSURE: I own shares in Sol Gold, and before you ask, I'm irritated that they did a financing at GBP0.25p.

Well we are moving into the home straight, we've been promised a maiden resource by the end of the year (link), so it was nice to get some more drill results to have a look at. You can download my 3D model here (link) and open it in Leapfrog Viewer.

Obviously, we are all waiting for the initial resource calculation that was promised by the end of the year. We've only got a couple of weeks before the Christmas party and tax sell-off season starts, so it will be interesting to see if SolGold can deliver.

Even though these results are groundbreaking, just extending and exploring known zones, they do appear to show that in there could be more than one grade center at Alpala. I also hate that they don't highlight where the holes are located. 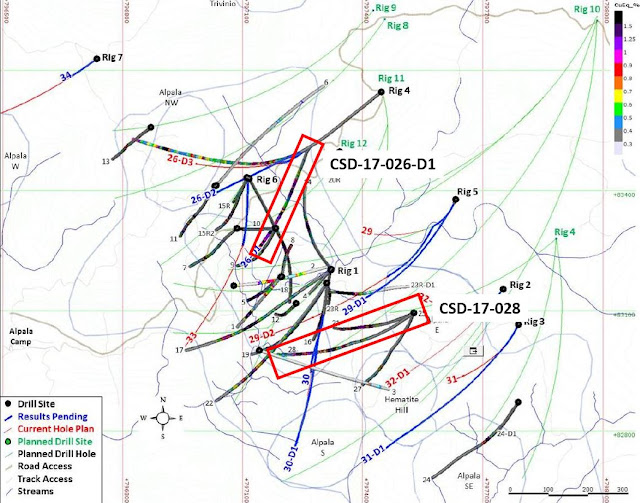 I not going to say that there are 2 porphyry centers (I haven't seen the drill-core or any interpretative geological plans for the project), so I've done some doodling on the map that accompanied the PR.

So I'm quite excited about holes 30 and 30-D1. If they come back with some decent intercepts my stupid idea  alternate interpretation could be correct, it could have a nice positive effect on an undated resource calculation in 2018, as these holes won't have been completed by the time the initial 43-101 resource is published in the next few weeks.

If we look at the holes individually, and again, I only have the data in the press release to work with, so it is incomplete and a best guess. 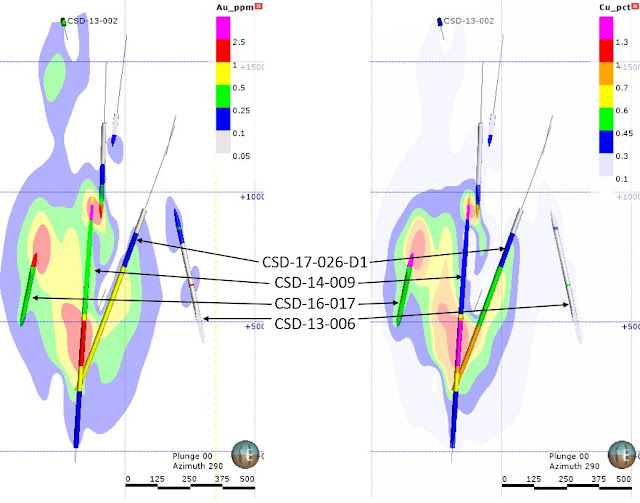 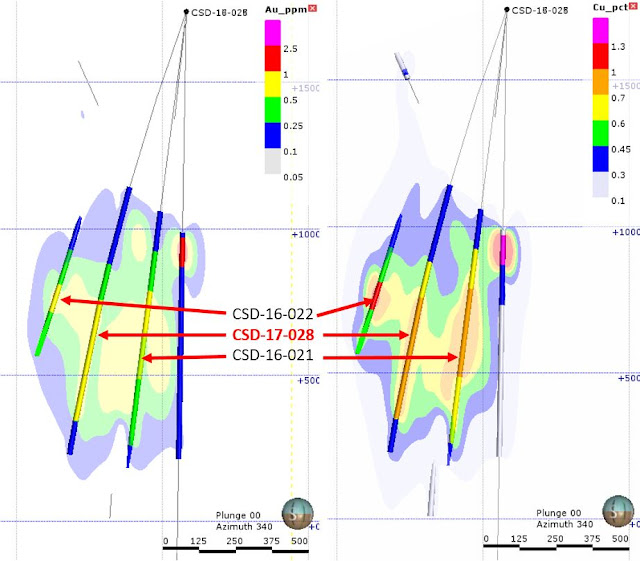 Hole CSD-17-028 was drilled between holes CSD-16-021 and 022, so I'm assuming that it was an infill hole to provide more confidence in these intercepts. It returned very similar results to hole 021.

I've hidden this at the bottom of the post. I'm not 100% (or even 50%) confident in my officially bad resource guesswork for Alpala, but I wanted to include the table to see what numbers I come up with to see how SolGold will get to their:

I regard this statement as a BS, the recent drilling didn't do much to their resources, and I don't know why they are mentioning that they want to define a billion tonnes at 0.9% CuEq at a 0.3% CuEq cutoff. That puts it firmly in the uneconomic category for an underground block-cave.

Personally, I'll be looking at the size and continuity of the >1% CuEq cutoff resources.

So, I'm not sure that they'll get to their billion tonnes, but I'm convinced that my model is under reporting the narrow-high-grade zones.


Posted by The Angry Geologist at 9:16 PM