Orex released some more results from Sandra (link), and here is the updated model (link).
I'm going to revise my earlier idea. Originally I though that there were vertical feeder structures feeding int silver mineralisation into a horizontal porous unit (the rhyolite tuff). However, the new data indicates that it looks like there is a second, deeper silver zone. It is much narrower and lower grade, but Orex was right and I was wrong, the silver is horizontal.

So where did the silver come from? It would be interesting to see if there is zonation in the other metals, but we'll wait for the technical report if they hint at that.

Basically the results from the 28th are in-line with earlier results, the high grade zones are slightly smaller than I originally thought.

We'll ignore the drilling for now, as I've been think more about the metallurgical study. It has been 3 months since Orex awarded the metallurgical testing contract to SGS Mineral Services, and we should be getting some news in the not too distant future.

However, I couldn't wait, I decided to do some research to see if I could find similar deposits with disseminated silver mineralisation and see what recoveries they got, so I could have a benchmark against which the Sandra results could be compared.

They say that all the best nuts come from California, and that also appears to be true for disseminated native silver deposits. In the foothills of the majestic Calico Mountains (check out the old mining town - link), nestled against the San Andreas Fault (yes that one) are the Waterloo (Pan Am Silver) and Langtry (Athena Silver) silver deposits.

There is SFA on Waterloo, but Athena released a 43-101 report on Langtry (link) outlining ~60Moz Ag, that included a section on the mineralogy (which minerals the silver is in), and results from several metallurgical studies.

I managed to snag this image from a PhD done on the district.

Hmm, microscopic silver in both, what were the recoveries like? 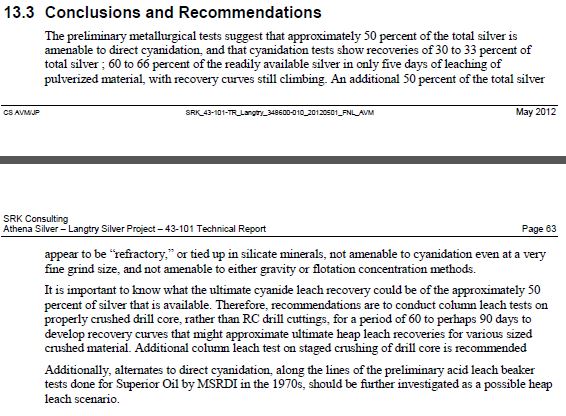 Remember this data is NOT from Sandra, but from a deposit that appears to be similar. It shows that recovery in disseminated silver deposits can be low, require a lot of study and may need to crush the ore very fine or use relatively specialised/non-standard (i.e. more expensive) processing techniques to increase silver recoveries.

I'll put a mark down and say that Orex will get 55% silver recovery from cyanidation with a fine grind (-325 mesh).

This is just a guide, It will be interested to see how close we get.

For reference this website has some good info on different processing techniques (https://www.911metallurgist.com).

Posted by The Angry Geologist at 11:38 AM