Look at Me, I'm Sandra Escobar


Orex has just released some new assay data from the phase 2 drilling at Sandra-Escobar (link) and they have included some additional information in their May presentation (link).


Nice work. I have to point out that the silver mineralization, at least from the first pass work, is mostly finely disseminated native silver. The observation that the high grade is near surface is reasonable but from the rocks I have seen, core photos and the fact that so far we have native silver and some bromides etc. suggests there is not much if any supergene enrichment. There are a few higher grade, high angle veinlets that seem to account for the higher grades.

All the drill-core and rocks that I have seen come from the Orex website and photos included in their presentations. So I was wrong in my last article to propose that the high grade mineralisation was caused by supergene enrichment, it appears to be caused by high angle veinlets, and that is confirmed by Orex in the latest presentation:


I’m going to assume that these photos are examples of the ‘best’ mineralisation, but you can quickly see that the highest values come from rocks with obvious veining, and the lowest (relatively speaking) grades come from quite nondescript looking rocks.
The photos immediately show us that there are zones with very different mineralisation styles, which will have different:
So I’ve taken the new information and tried to model the data in 2 different ways to get an idea of the silver distribution and to see if the high grade mineralisation has a strong vertical sense, does it form  a coherent zone(s).


We see a relatively continuous silver mineralisation. Is the off-set in the middle cause by a fault (or just lack of drilling data)? 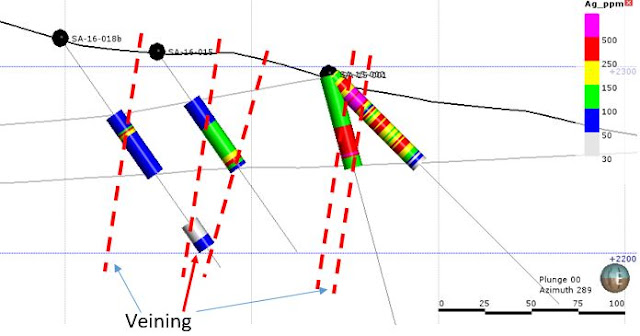 Is the majority of the silver hosted in near vertical veinlets that have formed a weak dispersed halo in a favorable, porous horizon?

Note: For drill-hole SA-16-018b (where the red arrow is pointing to), I only have the collar location so I’ve assumed that it was extending hole 18a to depth.
There is a high probability that it isn't correct, but even so, it appears to show a deeper zone of weak silver mineralisation, what is its source?


We see that there could be 2 high grade zones. It will be interesting to see if future drilling can connect these zones together.

Brent also comments that the Silver is found as native silver and some bromides, again we are fortunate that in the May presentation, Orex have included an electron microscope image of a silver grain in their May presentation. 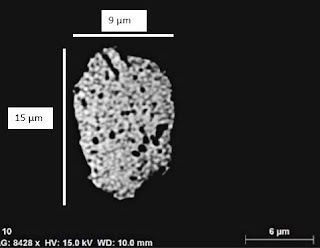 For comparison, that is about the size of a grain of dust or 1/5 the diameter of a human hair. 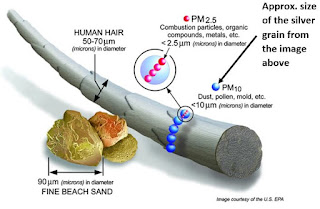 If the majority of the silver is in particles of this size, how easily can they be liberated from the rock? Do we have another situation like Mesa de Plata where a large portion of the silver is hard to recovery, and maybe uneconomic to do so?

This for me is an interesting project, I am looking forward to the next set of results, particularly from holes 36-38 that are drilled well away from the current mineralisation to see how far the silver zone extends.

Again, here are links to the leapfrog viewer files so you can look and spin around the data for yourselves.


These are cut down version of the models I create, if you would like the full view (topography, aerial images, plan maps and sections), please e-mail me and I will give a link to the file on my google drive. These files can be very large (50-100MB).

Posted by The Angry Geologist at 10:19 AM