Thanks to Rock Lobster for bring this to my attention. I mainly focus on exploration stage project and don’t have much experience of looking into the companies that own them, but I was intrigued and it gave me an opportunity to learn something new, and you can’t turn that down!

Galane Gold has 2 main projects in Botswana and South Africa.

A lot of the geological data was derived from the 2011 technical report that Galane released once the deposit had been acquired from IAM Gold. It looks like the classic, large-ish gold mining company selling a small asset towards the end of its life probably wanting to

The 2011 technical report identified a number of problems at the mine:
In the 2011 technical report it was emphasized that mining should continue to take advantage of the high gold prices. It looks like the high gold prices from 2011-2014 hid the multiple underlying issues at the mine, and the lack of action by management to resolve them has led to the current situation, where declining gold prices, declining grades and declining recoveries means that the mine is consistently loosing money, and at the moment the company appears to be rushing around trying to mine any gold mineralisation so that there is sufficient mill feed.

This is not a good situation to be in:

A figure is worth a thousand words:

Ore milled, head grades, recovery and gold production has been dropping quarter after quarter, and since 2012 gold production has halved. There have been occasional good quarters, when they have been mining high grade zones of a satellite deposits, but these good times are few and far between.

The Mupane mine is on its last legs, and in the MD&As the company are betting the house on the main Tau zone, that they hope to bring into production in Q3, 2016, and between now and then their plans are:
This sounds like they are in panic mode, and when you look at their working capital situation you have to be concerned that they don't have enough capital to last until they bring Tau on stream.

I also noticed this in the MD&As: 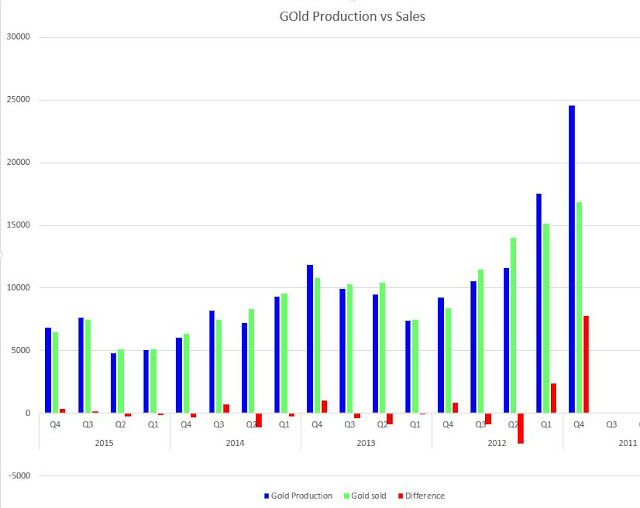 So from 2011 to the end of 2015 we have:
Why is this, where have those ounces gone?
Is it something simple, they have a stockpile, or a discrepancy between the mine, the mill and the refining company? It would be an interesting question to ask?

This was a small (15Koz/year) underground mine that it currently on care and maintenance. It contains ~150Koz Au reserves and 1.5Moz of M&I and Inferred resources at an average grade of 3 g/t. It appears that the Galaxy mine is key part of Galane's long term future, their plans for Galaxy are:

However, Galane have negative working capital (-$2.8M) at the end of 2015. Do they have sufficient funds to cover their debts and fund significant capital outlays to complete the development of the Tau deposit and the Galaxy work?

Galaxy is an interesting project, it has significant resources, but is it going to produce significant revenues to turn around the poor performance from Galane over the past few years?

Here is a chart for the last couple of years of production from Galaxy, broken down by ore zone (from the 2016 technical report).

We can see that over 20 months ore was mined from 7 different ore zones, and production ranged from >12,000/month to under 1,000. This is classic scenario for old, tired, small underground mine that has lacked investment to develop new ore zones. The operation jumps around, mining any remnant resource blocks that are availbaeasily accessible.

In this situation it is very hard to maintain consistent production levels to keep the mill, mine and most importantly the shareholders happy!

Ignoring this issue there is something that is even worse, when we dig a bit deeper we see this point on page 13 of the technical report:

So, if we apply this 63% factor to the for Galaxy, Galane are only receiving revenue 63% revenues from the contained gold, let us compare that against the resource grade of 3.37 g/t, multiple it by 0.63 = 2.12 g/t payable gold grade and this is very close to the cut-off for the deposit.

There are higher grade areas but they are deeper and require investment to rehabilitate shafts, and pay for underground development. Does Galane have enough in the kitty to pay for this?

It is also mentioned that the environmental permits have not been maintained for Galaxy, I don’t know how long it will take to renew them, it could be a quick and simple process or a complicated, time consuming process. This could add a lot time to the proposed program and delay production

Galane are operating a loss-making old open pit mine and due when gold prices we high it allowed them operate at a profit and ignore the various issues that has affected the mine since 2005, and due to the drop in gold prices and lack of investment to resolve the well-known multiple issues effecting the deposit has come to bite them in the ass and left them operating an unprofitable mine with depleted resources and no real plan to turn the operation around. All that has happened is that it has eroded away at their working capital and leaving them in their current situation.

The Galaxy acquisition looks interesting, but as with old mines, needs work to define some decent resources that could be used to bring the mine back into production and serve as a base for to expand the operation. The 30% smelter change is huge and significantly erodes the profitability of the project and needs to be look at closely. There may be an opportunity to negotiate a better deal or look at possible engineering solutions. However, I feel that they way that current management have handled the Mupane mine you have to be highly skeptical of their ability to develop and profitably mine it.

I've uploaded the spreadsheets I made from the Galane MD&As and you can get them from here (link)
Posted by The Angry Geologist at 7:48 PM