Exploration - it's a question of scale


Once mineralisation has been discovered and the initial hubris generated by early drill results has died down (normally accompanied by a relaxation in the share price), exploration companies will be focusing on defining a resource as quickly as possible, but we all know the definition of a resource:


“A ‘Mineral Resource’ is a concentration or occurrence of material of economic interest in or on the Earth’s crust in such form, quality and quantity that there are reasonable prospects for eventual economic extraction.”

This is not an inventory of all mineralisation, and we often see a lot of companies pushing this by calculating a high equivalent grades by:
The most important variables in the calculation and classification of a resource is geological and grade continuity, and a good rule of thumb is:


There is no set spacing and grade and geological continuity will vary by deposit type:


However, drilling costs money, you companies will try and maximizing the value from drilling by:

Focused Drilling - maximizing grade
This is drilling as many holes into a small, high grade area as possible so a company can pump out PR after PR announcing more and more excellent drill-intercepts.
This leads to the definition of a small, high quality resource, but with the "boy that cried wolf" effect, investors could be unimpressed with the size of the resource (i.e. they were expecting something bigger and better).

When we see a long section of the drilling we can quickly see that most of the holes are focused into the central high grade zone with a few holes outside this zone.

I'll like to illustrate this. If we take a hypothetical vein ("X") and overlay drilling that is concentrated into the high grade zone, what would it look like?

We can see that we have only drilled a small portion of the mineralisation, but with such close spaced drilling we have defined a very small tonnage of high quality (measured and indicated) resources.

Diffuse Drilling - maximizing tonnage
This is the opposite of focused drilling. The exploration company is drilling the deposit on very side spaced drill-holes to try and define the largest tonnage possible (i.e. quantity over quality). However, as all deposits have significantly more lower grade than high grade mineralisation, statistically the majority of the drill-holes will hit low grade mineralisation and will lead to the underestimation of the grade of the resources calculated

Let's bring back vein X and overlay it with holes drilled at various spacings. 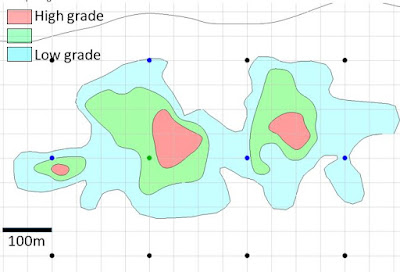 Only a small proportion of the holes (5 of 12) intersected mineralisation. Confidence in the continuity of grade between holes is low, so no resources can be defined.

100m spacing
We can start to see that the mineralised zone is becoming more continuous, to such an extent that we can see internal variation in grade and are becoming more confident that mineralisation continues between drill-holes. There is sufficient data to define inferred resources.

50m spacing
We can see that drilling has defined several high grade areas and the limits to mineralisation. We can see that is excellent continuity of grade between drill-holes and can be confident enough to define Measured and Indicated resources.


Exploration companies will always try to portray their project as best as possible, their business is to get you to buy their shares to increase their share prices so they can raise money. Simple things like looking at scale bars on maps and figures can go along way to see if a company is trying to focus your attention either into small scale or very large scale features, but here are a few things to look out for:


Posted by The Angry Geologist at 9:08 PM