Short High-grade Inconsistent Type intercepts are a bit of a curse for gold exploration. You get a great hit, but when you follow-up it suddenly disappears.

There are many reasons for SHIT intercepts, but sometimes drilling gets cursed by the golden drill-core vein snakes, those little b*stards that wriggle up a drill rod. they are skinny little buggers, but can give you a few meters of great grades and then they bugger-off.

Like this one, I snapped from a gold project I've been working on recently.

Here is an annotated version. 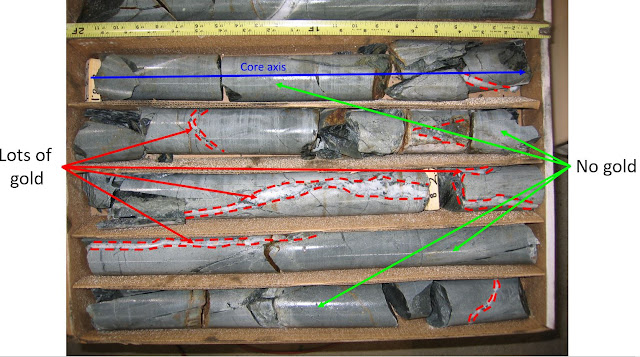 Typically, half of the core goes for assaying and half is stored. When they collect a sample, they cut (or as this is the US and they live in the olden days - use a splitter) down the axis of the drill-core (blue line in the photo above). What happens when you have a vein running up the axis of the drill-core is that you will be biasing the assays with high grade mineralization, and leading to an abnormally wide, high grade zone, that is clearly caused by a couple of 1cm wide veinlets.

The nice thing about SHIT intercepts is that for the FAG (the Fraudulent Angry Geologist) they give you an opportunity to pad your PR with some MAXIMUM IMPACT (tm) BS, by letting you:
The other issue is that they can cause chimping (a photographer's term) in the exploration manager (i.e. pointing his finger at the red colored stuff and going "Ooo ooo oo!"), who makes you go back and drill some holes around it (as it could be good), against your advice, that hit nothing, and leads to the inevitable question - "why did you drill those holes".