Disclosure: I also hold shares in Cordoba, I feel that Alacran is a good exploration stage project. Cordoba have found a decent, at the moment small (~50Mt), well mineralized deposit. I am hoping that this will be the first of many similar deposits found around their property.

We see the share price surge after Cordoba released assay data from a spectacular drill-hole at San Matias (link).

I was a bit disappointed they didn't include a map showing where the hole was located, so that we could relate it to earlier drilling.

What I have done is take the data from the recently released DH data to see how much more mineralization they have potentially drilled at Alacran. Here is the official resource: 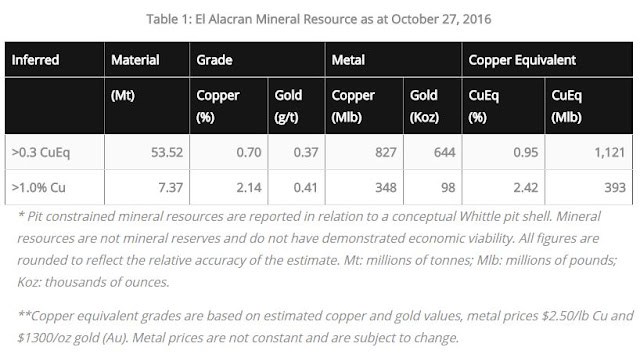 Since the initial resource calculation, Cordoba have released the data from an additional 14 holes (link). Unfortunately, Cordoba don't give any decent plan maps to accompany the press releases, the ones they do release as missing grid coordinates and they don't label all of the holes which means I have to guess which hole is which (I'll let you make various innuendos).

UPDATE: I've had some feedback, and the reason that Cordoba don't release the drill-hole coordinates isn't just to piss me off, it is to prevent the informal/artisanal/illegal (select as appropriate) miners from knowing exactly where Cordoba have been drilling and going to those places and start to mine. In many countries in S. America dealing with informal miners can be very difficult and I can understand CDB taking measures to prevent this.

Here is my 3D model (link), and you can see like the cross sections that Cordoba show on their website, you can see that the mineralization is restricted to specific rock units. 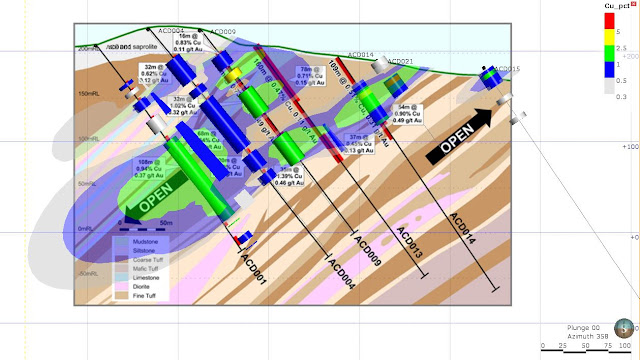 You can see that we have gaps in mineralization, these are unmineralized areas and are fairly common in porphyry systems. Typically they are caused by later, unmineralized intrusives (dykes - Panoro's Cotabambas project is a good example of this) cutting through the mineralization. Here they appear be caused by maybe less reactive or more competent units within the siltstones. It isn't clear.

Here are my officially bad (tm) resource calculations. For this I've used the following parameters:


Here are my estimations with all the recent drilling:

So we see he have had a nearly 20Mt increase in resources and we haven't seen a drop off in grade, which is nice.

They got some very good intercepts including ~100m (from surface) @ 1% Cu and 0.65 g/t Au which is very nice! Some impressive grades, and I would be interested to see some more holes drilled in this area sometime in the future.


Posted by The Angry Geologist at 5:34 PM