Why does drill direction and dip matter?

A big thanks to Darryl Lindsay for prompting me to expand on a point I made in the Cascabel post summary but didn't explain it any further, and to Exupery for asking for some clarification.

Imagine you are a long suffering director of a junior exploration company. Those damn geologists want to spend money drilling a gold project whereas you just want to stake some Lithium prospects in Nevada/Chile/Argentina etc, and live the good life in Vancouver/Toronto/London etc.

Junior companies don't have massive piles of cash and drilling is expensive (this varies by country - but diamond drilling will be around $200-300/m), but you relent and allow them to drill a few holes (1500-3000m) costing around ~$0.5 to 1 million (or more).

You an see the costs add up quickly, so it is key not to waste money (remember every dollar put into the ground is a dollar less for your expenses) by drilling holes with low potential to get a good intercept that you can use to generate news and interest and provide an opportunity to raise money.

Some company's go to the 100% total BS end of the scale to maximize either the thickness or grade from a drill-hole, and the prize for this goes to Avrupa Minerals for their Slivovo project in Kosovo.


Even the well known exploration companies can get on the bandwagon - here is some drilling from their Kipushi project in the DR of Congo, but as this is at 1000m depth, there are few areas where holes can be drilled from.

In other cases it is accidental, the company doesn't know what the controls are on mineralisation and a few of the early holes have been drilled down the middle of a vein/high grade zone of high grade, or it has been assumed that the mineralisation is 'disseminated' and can be explored with vertical holes - this is a very common, but bad practice.

What should you look out for?
Here is an example from a Cu-Au project in Peru.


Let us zoom in a bit where we have 1 hole that hasn't been drilled vertically.


What is happening? Basically you have a strong vertical control on mineralisation, i.e. the gold is found in narrow, near vertical zones and when a hole hits the middle of that zone you gets lots of gold, and when it misses, you get no gold. 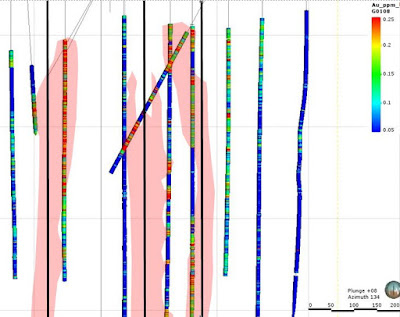 I've put on some hypothetical drill-holes (black lines) that target the good gold zones, and we know that no exploration company would ever try and abuse the situation to maximize their results....

This is from a gold project in Canada - but you can see that the Au vein is only a very small portion of the rock, and if the holes had been drilled at a different angle you would have drilled much less vein and much more barren rock.


We also see this to some degree at Cascabel. It is a porphyry deposit the copper and gold are not evenly distributed but is found in veinlets and fractures.

What does this mean when we look at the drill results?

I've included a couple of sections to illustrate:

This hole came within 2.5m (a car length) of hole 012 (they cross over in the low grade zone). They essentially drilled the same piece of rock, but one holes (the vertical one) hit lots (relatively speaking) of gold and copper and the inclined hole hit nothing.

How can 1 hole (012) hits lots of copper and gold and another hole (13-004), exploring virtually the same area hit nothing? If the mineralisation was disseminated we would expect to see both holes returning grades that are very similar.

This means there is a strong vertical control on the veins (therefore the grade) at Cascabel, which is normal for a porphyry deposit. Here is the section where I have (crudely) drawn some >1% Cu zones.

I'm not accusing Sol Gold of misleading people, I'm just using their data illustrate a point. As the mineralization at Alpala is deep, they simply can't afford to drill 1.5-2km deep holes to cut the mineralisation at a shallower angle. I just want people to think about what they are seeing and to spend a bit of time looking at data.

Download the Leapfrog viewer file here (link) - it is the same as the one in the previous post on Cascabel, and spin around the data ans use the ruler tool to measure the distance between drill-holes.

Posted by The Angry Geologist at 2:00 PM