SolGold - Cascabel Project - A snake in the Grass?

SolGold (AIM: SOLG.L - www.solgold.com.au) have been announcing some very impressive drilling results from their Cascabel project in Ecuador. They have been reporting some of the best porphyry copper-gold intersections in the world, Ever!

Summary.
Here are some questions that I was thinking when playing around with the data:

I was intrigued, a small ASX and AIM listed company with a $0.1 share price (or 6p in old world money) and a $80-90M market cap (ahh a normal ASX listed company where a tight float is if you have less than a billion shares issued).

So I went through the project data all the way back to 2013 and  brought as much data as I could find so I could review it and to separate the reality from IR spin. This was hard to do. There was a lot of fluff in the press releases, but some nice photos which were very informative.

This is understandable as they have been drilling some very deep drill-holes (up to 2000m) and these holes take a lot of time to drill (2-3 months per hole), and the company, understandably, wants a continued stream of news from their , but it made it a challenge to find out true hole depths, azimuths and so on....

But I have my ways (and a bit of basic trigonometry helped), and here is what I could extract and share with you, and I've also included their proposed drill-holes (azimuths and depths are educated guesses).

At first glance hey aren't too bad, I thought I had found a decent project with good upside.


All of the drilling to data (18 holes for 23,700m drilled) into the Alpala target and they have defined a 500m x 500m x 1500m (vertical extent) zone of porphyry Cu-Au mineralisation. But, darn, the high grade stuff is really deep, starting at around 500+m depth.

When I looked at the data I noticed that most of the drill-holes were almost vertical and you combine this with what looks like a vertical deposit you get to understand why the grades they have been reporting are so good.


As you can see those rocks aren't beautiful shades of green, and Sol Gold nicely tell you multiple times that they have bornite and chalcopyrite at surface. So no nice and cheap to mine and leach oxide ore. We can ignore this, it is too small, too low grade.

The value in this deposit is the high(ish)-grade mineralisation at depth, and Sol Gold nicely show us their conceptual 6km ramp that will run below their Aguinaga target to below Alpala, which is nice. 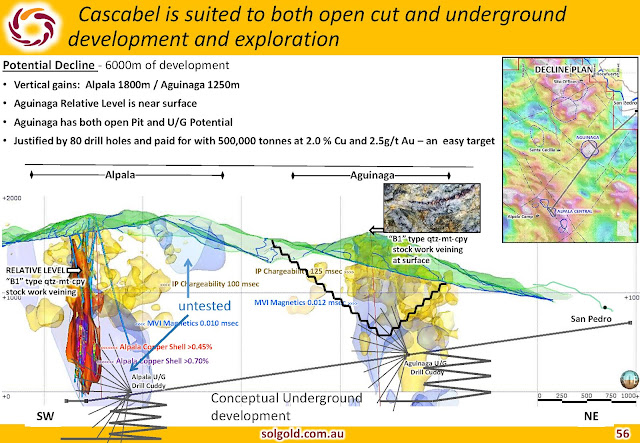 Often you can tell a lot about a project by what isn't being told. All of the drilling is focused into a small 650m x 550m area.


When we look at their proposed phase 2 drilling, again, all of them are focusing to drill into the area of known mineralisation, no holes appear to be planned for any of the other targets. Why is this?

You would think that they would plan a couple of drill-holes for some of their other targets that have similar (or better) exploration results? All we see in the PRs are a few surface samples and a single trench.

So for the phase 2 program only a single new platform is being built? No holes are planned for other targets? There could be a number of reasons:
So there you go, an interesting project, with some good rocks, but in the wrong location. Maybe once Mirador is built (or Sol Gold decide to issue $17B of loans to Ecuador to get special treatment), this could be a good project.

One to keep on your radar.

Posted by The Angry Geologist at 12:50 PM