This a quick follow-up post on Valley of the Kings. I had a lot of feedback from people from my last post, so I decided to work with some more data to see if my initial assessment was valid.

My original hypothesis: The VoK deposit was essentially a series of irregular, narrow veins emplaced in a weakly mineralized host.

So, as I often do I like to compare the PR intercepts against reality.

Here are the CUT intercepts from the 2015/16 drilling (140 drill-holes, data from Pretium website) and you can clearly virtually every hole has intersected multiple, thick high grade (>10 g/t Au) zones.  I mean every single drill-hole, no matter where it is located, has drilled a wide zone of excellent gold values. All hits and no misses, that is exceptional.


So for a casual glance at the data, everything looks great, you have:
This project is as near to perfection as you can find. It should make massive amounts of cash for everyone, and we can all retire to the Caribbean.

But, when I started to look at the data in detail, I noticed something strange in the assay tables:

Normally companies will report the just the highest grade intervals within the mineralized intersection, so why would you report a high-grade sample with lower Au values than the average grade of the whole intervals? It make no sense.

Is everything well in Rome?

I worked on a subset of the data that Pretium has released on their website. I focused on just 140 drill-holes from the 2015/16 drilling campaign, and started pulling apart the data to work out the grade distribution and see what the high grade zones have on the overall grades for the wide intercepts.
It quickly became apparent that the majority of the gold (often >90%) is found in the high grade structures, and the average grade of the rock between them (i.e. the low grade bulk tonnage material) typically contained ~1g/t Au.

When we look at this data in 3D and compare it to the image above, we see:

The thick 10+ g/t Au intervals have ALL disappeared when we remove the impact of the high grade structures. The rock surrounding these 50cm wide structures contain less than  2.5 g/t Au.

I calculated the arithmetic average grade of the country rock to be:

This is about half of the cut-off (5 g/t AuEq) used by Tetra Tech in the 2014 feasibility study.

Pretium is building a 2700 tonne per day mill to mine ~1 million tonnes per year from VoK. The way that the data is presented in the Press Releases they state that there are wide, continuous zones of gold mineralisation, that will be easy to mine and contain excellent gold values and amenable to be mined on a large scale by mechanized mining with relatively little dilution.

When you pull apart the data you can see that in reality the majority of the rock that they plan to mine will be this low grade country rock with small zones of high grade mineralisation. If this is the case, then with mechanized mining there will be huge dilution, with 90% of the rock that they will be mining and processing containing less than 2.5 g/t Au, and only a small portion containing the bonanza grades that have been headlining the press releases.

At other gold projects (e.g. Curraghinalt), drilling has defined a number of veins that have been defined for many hundreds of meters vertically and horizontally with a high degree of confidence.


At VoK it is different, Pretium admits in their May 31 PR, that after a massive drilling campaign and with a drill-hole every 5-10m, both vertically and horizontally, they don’t know the orientation of these high grade structures.

The widths of the high grade structures at VoK range from 0.5 to 2m,  with an average width of between 0.50 to 1.0 meter.  These widths are amenable to more selective mining methods, such as cut and fill, which will lower the dilution factor but will be difficult to maintain the high throughput needed to feed the mill.
So in conclusion, Pretium don't accurately know where these high grade structures are located, but they appear to contain the majority of the gold in the deposit?

Why and how did this happen, maybe a clue is in the 2014 technical report, in below the summary resource table you see: 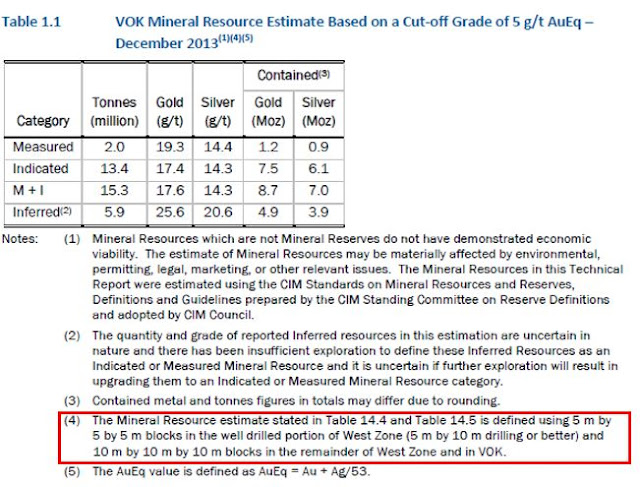 They have used a block size of 5m x 5m x 5m, what does this mean? I’ve taken an image from K2 & Associates excellent summary on the Asanko Gold Mine, to demonstrate this visually:


You get this strong feeling that there is something not quite right at VoK. I’m not saying that Pretium are being fraudulent, but I do I feel that they may have been biased by their desire to exploite VoK using mechanized mining that the methodology that has been used to calculate the resources isn't optimal for this type of deposit and has led to the very high grade gold values being smeared into the low grade country rock and 'making' it carry economic grades.

Have they shot themselves in the foot by using a methodology that has led to the extreme over estimation of the size and tonnage of the high grade mineralisation? Time will tell, Pretium stock will rise and fall with gold prices, but it will be interesting to see what happens once they start mining, and when their quarterly reports are scattered with missed production schedules and quotes like -  "the deposit is more complicated than we expected" or "the grade is more variable than expected".

When I was running through the data I humorously commented that why didn't report their 50cm interval grading >20,000 g/t Au as 10000m at 1 g/t Au, as mathematically they are the same.

Again, you can find a Leapfrog Model containing the summary PR assays as well as the back calculated residual assays (link).


I know I will receive a lot of comments telling me that I am wrong, and that the bulk samples collected demonstrated that Pretium’s methodology was correct, but why don’t we look at that as well. 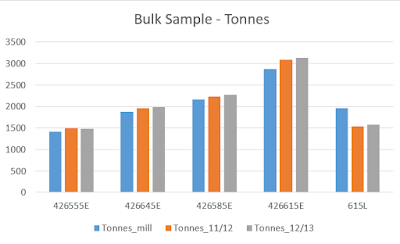 The tonnes processed are very similar for each area, with slightly more material mined from area 615L. Nothing surprising here. 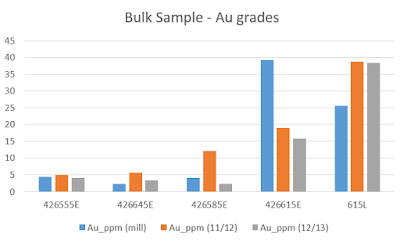 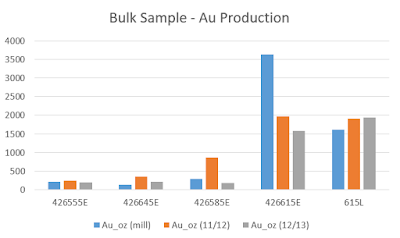 It was the surprising high grades mined in area 426615E that saved them. It was not predicted in Pretium’s own resource model, was the materiel they mined representative? Strathcona attributed the high grades in this area to the previously unknown Cleopatra vein. why don;t we have a look at what the drilling tells us about where this sample came from.

Here are a couple of sections from Pretium, showing the 426615E bulk sample area:
And you can see that below the level is a nice high grade intersection.

It is more obvious here - there is a very high grade structure exactly where the bulk sample was collected.

It looks like this sample was not a representative sample for the whole resource, but luckily managed to collect some high grade material that made the number balance out.


Posted by The Angry Geologist at 3:28 PM

Email ThisBlogThis!Share to TwitterShare to FacebookShare to Pinterest
Labels: gold, Pretium, valley of the kings, VoK