I mentioned (many moons ago) that I was working on a review of the Eastside deposit that is currently being explored by Columbus Gold.


I think there are better project in invest in, I quite like Gold Standard's Railroad project (I'm working on reviewing this project now), but this could be one to keep an eye on, especially if they get some better results from drilling around hole ES-100.


I found this project very interesting to work with, the drilling has found two zones of gold mineralisation (East and West). Near surface the gold is relatively chaotically distributed (in narrow veins/structures) and at depth these high-grade zones appear to widen and are surrounded by a wide zone of low grade disseminated mineralisation.

We see our normal exploration company trick of grade expansion - increasing the average grade of wide zones by including narrow high grade intervals. This happens with frequency at Eastside, but Columbus have included a number of sections (link) that you can see what is going on.

So, here is the project in 3D (Columbus have a video here (link) - the interesting part is from 2:30 onward) 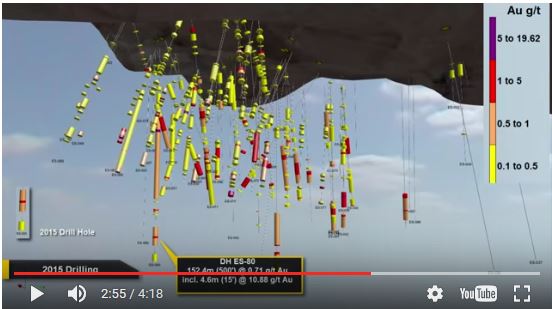 You can quickly see that the majority of the intercepts are less than 0.5 g/t Au (yellow) with relatively few high grade hits. 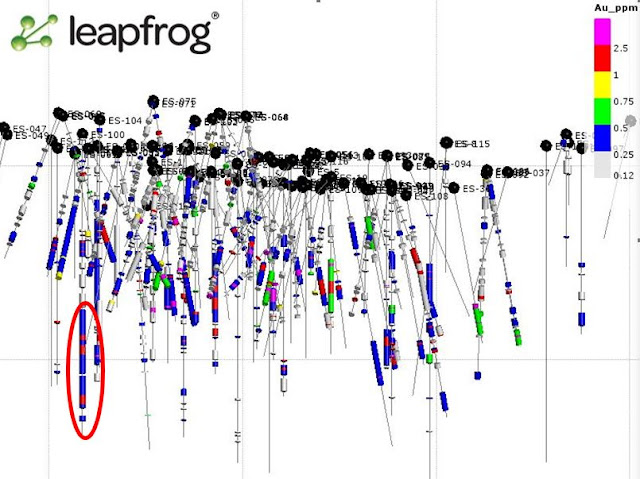 Again you can download my 3D model here (link)

Just eye-balling the data, the majority of the mineralisation at Eastside sits between 0.25-0.5 g/t Au (for reference - Silver Standard are mining 0.45 g/t Au rock at Marigold), and when you couple that with the fact that the 'good' mineralisation appears to start at around 100m depths, it begs the questions, are the grades good enough to sustain a large pre-strip to get to some low grade material?

But it isn't all bad news. Drill-hole ES-100 intersected a thick zone of moderate grade rock (section 28740 - below).

This zone has been poorly drilled, many of the drill-holes around this area were stopped before they could reach this zone, and one hole (ES-112 - results pending) was drilled to see if this zone continues to the south, but may be poorly located and could actually miss the target.
Maybe Columbus could see about extending drill-hole ES-103 by another 300m

I've going to keep my eye on Eastside, at the moment the drilling to date hasn't defined any decent grade mineralisation, but hole ES-100 offers some hope. If hole ES-112 is successful, this could be a project to key your eye on.


However, I did see some issues.

When you watch the video and spin around the data from Eastside (you can download my model from here (link) and open it up the the Leapfrog viewer), you 'll notice that the 'best' intercepts (the thickest, highest grade zones) appear to come from vertical drill-holes.

This is typically where you have vertical mineralisation, a few holes get lucky and drill down a high grade zone and give great results, but often holes miss them and give you low grade (or nothing). I would like this zone to be drilled with some angle holes so to provide more info on the nature of the mineralization. Good rule of thumb - if a project has only been drilled by vertical holes, there will be issues.


I also noticed in the March 2015 technical report was the inclusion of metallurgical test results. This was surprising for a project with no resources, but it is good to have as you need to know if you can actually recovery the gold and silver. If the recovery is crap, it gives you an opportunity to walk away and spend money elsewhere.

It was stated that the recoveries were good, 94.8% for Au and 52.1% for Ag. That is excellent recovery for gold, and for silver, it is such a minor constituent, no-one really cares about it. If you look at the accompanying table (12.1 - page 48), you'll notice something. 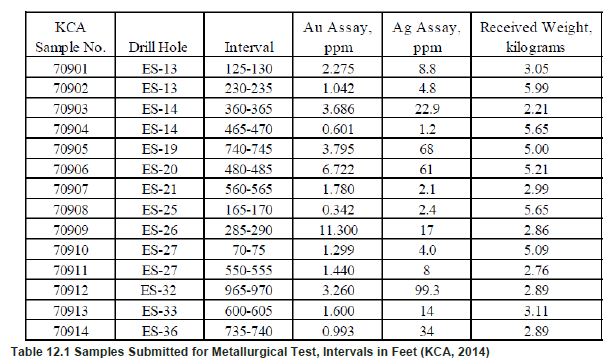 Cast a quick look at the drill-intercepts figure above, you can see that the majority of the drilling intercepted grades between 0.25 g/t Au and 0.5 g/t Au. How many of the samples in the table above lie in this range?
The answer is 1 - sample 70908 - averaged 0.342 g/t Au. Every other sample (13 or 93%), can from material that was, in cases, significantly higher grade. This essentially means that the metallurgical results are useless. I would like to see the results from sample 70908 to see it its recovery is significantly different from the other samples as it is testing modal (the most frequently occurring) i.e. the majority of the mineralized material in the deposit. If the recovery for this grade material is poor, the deposit has no value.

Why is this important? I've taken some data from Gold Standard Resources Pinion project (link) to illustrate. 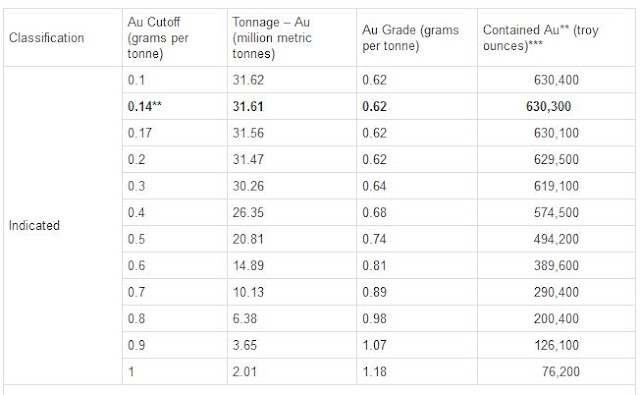 I chucked the numbers into Excel so we can see them visually. 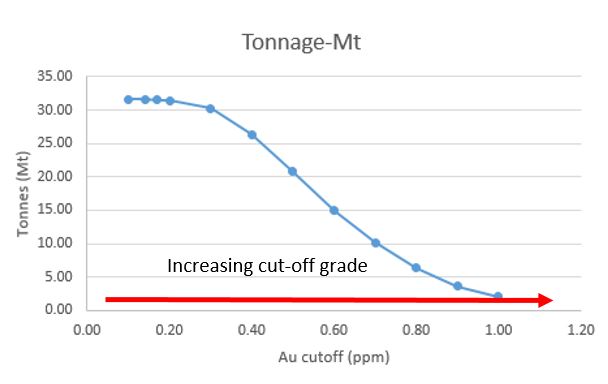 This is logical, basically you have smaller amounts of higher grade material, and this means that a similar pattern is seen in the contained ounces. 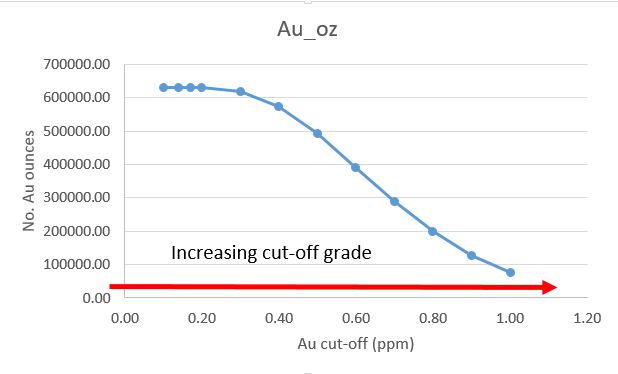 If we assume that a similar pattern is seen at Eastside, and just working with the subset of data that I got from their website, we can see that:
If we ignore the samples grading less than 0.25 g/t Au (I'm assuming that this will be waste), we now see that:
NOTE: my data is biased due to the over reporting of high grade intervals in the press releases.

So we can quickly see that there is an extreme bias in the metallurgical sampling. The majority (79%) of the samples test were from high grade areas which (using the Pinion charts as a guide) will probably form a minor (less than 15%) part of the deposit. If this company is serious about mining this deposit (at this stage they aren't), I would like to see a few more samples testing the average grade material.

I was a bit disappointed with the quality of data released to the public by Columbus. I identified numerous errors:
This may suggest a lack of attention to detail (i.e. rushing data into press releases), and they are probably just minor issues (my belief). However, it makes you think a bit more a dig deeper to see if this is actually a reflection on the attitude of the company when handling exploration data. I don;t think this is happening here, but is more common that you think, especially in Latin countries emphasis is put on data presentation (i.e. how "pretty" the logs are) rather than the importance of collecting high quality data.


Posted by The Angry Geologist at 5:46 PM