I've received some comments on a post I wrote back in Jan 2017 on El Cobre (link). I haven't been following them but I was intrigued on why Newcrest were so interested (link). What has changed since my last post?

We've had some reasonable intercepts (link, link and link) over last year, so I thought, time to do an update as this project is ripe for an initial resource estimate. So here is my officially bad guesstimate:

Despite its name, El Cobre is in reality a gold deposit, but with ~2Moz @ ~0.7 g/t Au, is it good enough, especially when we have several, much larger deposits at a similar grade that are still sitting in the ground?

Here is a plan map showing the 4 areas that have been drilled by Almadex.

Here are a couple of pseudo-long sections (looking Northwest) 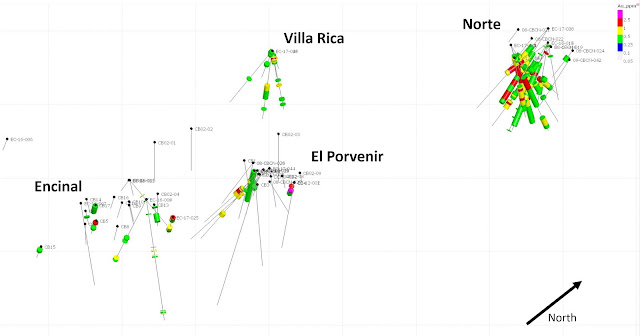 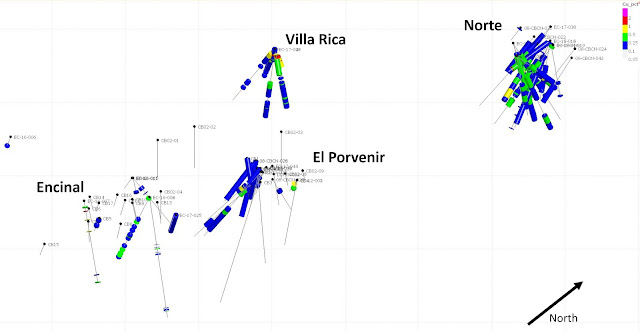 You can clearly see that the highest grade and thickest (i.e. the 'best') intercepts are from Norte, with a bit of copper at Villa Rica/Raya Tembrillo and some bits 'n' bobs in the other areas.

An interesting observation, when we compare the known targets against the soil geochemistry.

We can see that the best area drilled at El Cobre, the Norte Zone has a minimal associated geochem anomalies, just a single line (Line 75800 - page 37 in the technical report), with some robust Au, Cu and Mo anomalies. I would love to see a regional map of soil Mo data as there could be a few other targets that could be interesting but where the Cu in the soils has been leached away.

The Norte zone has received the bulk of the drilling and given the best results so far.

The follow-up drilling isn't as special, intersecting several thick low-grade (<0.25% Cu) copper mineralization with a few narrow higher grade Cu-Au zones (dykes?). There may be some potential to the SW (left), but overall the grades are low and for gold discontinuous.

We've only had a few holes drilled into Villa Rica, so it is hard to have a definitive opinion.

Form the drilling so far, we can see that Villa Rica is more copper rich, with thick low grade intercepts (<0.25% Cu) with higher grade Cu and Au mineralization restricted to narrow zones - better mineralized dykes or breccias? It was also interesting to see high-grade copper at/close to surface - are we seeing some supergene enrichment?

I feel that the drilling to date shows that the potential at Villa Rica is limited. The geochem data shows a large target, but this may be an erosion anomaly (i.e. copper weathering down-slope towards the streams to the east and south).

This is the area where Almadex hit a high-grade gold vein in hole EC-16-008.


Again, we see generally thin, scattered intercepts, but hole EC-17-025 did intersect a thick zone of low grade (<0.25%) copper mineralization that could be peripheral to a larger system to the East (right).

The most obvious problem could be the metallurgy. I haven't seen any mention in in the technical report about any basic met-work. It would be nice to know the distribution and style of mineralization (e.g. is the gold all in sulfides, or is there a thick oxide zone etc..) as this could have a big impact on the processing (dump leach vs milling) and recoveries. If you're interesting here is a link to a decent paper on the subject (link).

Overall, outside of the Norte zone, most of the economic Au-Cu mineralization appears to be restricted to narrow scattered intercepts. There may be potential to the east in Encinal, but nothing that is indicative of a large, well mineralized porphyry system.

For me, I can't see where the project could be expanded to >5Moz Au that could lead to development, and the regional targets don't appear to offer any upside.

Posted by The Angry Geologist at 12:26 PM