So we have the Taylor PEA, it is lovely, beautiful and highly profitable. I've actually started sleeping with it, so I can absorb its awesomeness while I'll sleep, but sometimes every silver lining has a black cloud.

I'll pass-over the fact that they are going to dump a load of tailings on top of the Central deposit (table 14.10), and ignore that Central has been on a the mango diet that has allowed it to shed an unsightly 60Moz from slimmed down from (table 14.19) a portly 200 Moz Ag to a sprightly 140Moz. I'm guessing that mango is laxative....

It makes for nice and easy permitting, just a few permits for water discharge, explosives and the like, but it does mean that they will have nearly 300 feet (or 100m) of dry-stacked tailings above the main production decline and shaft, and as they don't have enough land for everything, so unfortunately, Hermosa had to go and get buried.

However, they didn't quite get everything onto the private land, just a few irritating water pipes from the various water wells that they need to supply water to the mining operations. They couldn't drill in the public land so a couple of tubes will be fine.

I'm going to ignore the work required to upgrade access roads to site and the fact that there are several public forest service roads that cross the private land to get to the National Forest land on the other side, I don't if Arizona mining can prevent access, or if they will need to build new roads to bypass their property.

But, I'm confused, I was looking at the numbers in table 22.2 (page 215), as I was playing with the numbers, and I was checking the recoveries against the results of the metallurgical test-work.

You can see that the projected recoveries vary by zone, which is perfectly normal, we have a different amounts and types of lead, zinc and silver minerals. The very poor zinc recovery in the Scherrer zone is because the zinc is in silicates, not sulfides, and cannot be recovered through flotation.

However, as you know, I like to check the following:


Here are some nice pictures to show how they compare against the projected metallurgical recoveries (tables 13.5, 13.6 and 13.7) reported in the PEA. 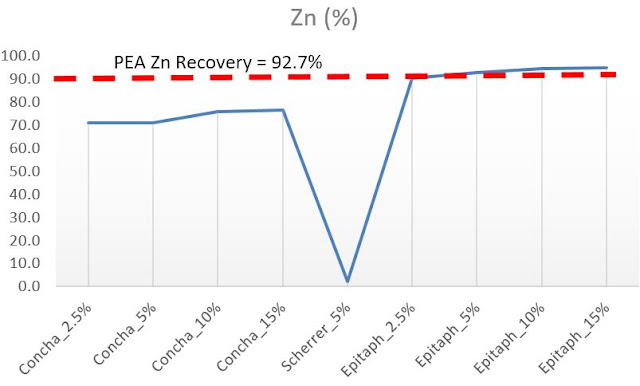 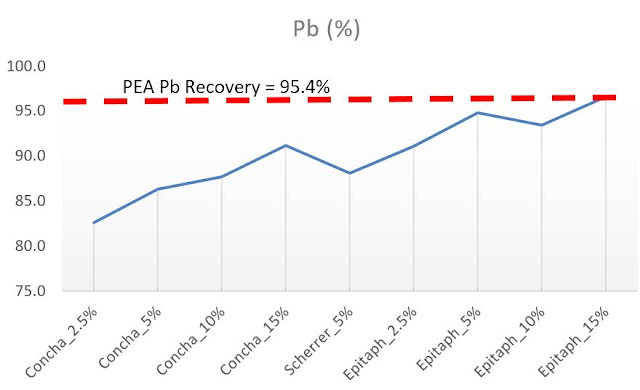 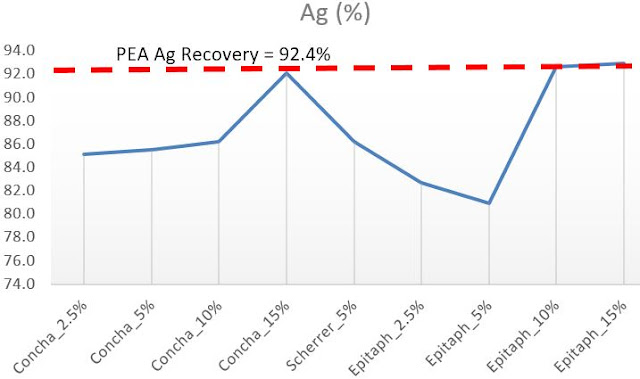 I've added some nice, thick red-lines to show the recoveries used for each metal used in the recent PEA. You can see that only the Epitaph ore have recoveries that match the numbers used in the PEA, for the other zones they are, in some cases a lot lower. This is where the different zones are located:

Is this a problem? No, if AZ are only mining ore from the Epitaph zone. Their plan is to mine 60.8Mt over 23 years, so how much ore is there in the Epitaph Zone?

So, if we take all of the Indicated and Inferred resources, we have 48.2 Mt in the Epitaph zone, but that leaves us with a small, 12Mt short-fall.

Where is this this material going to come from, and why is it important?