Today we received the long awaited metallurgical results from Sandra Escobar and it a nutshell, they are worse than crap they are abysmal.

What does Orex's president, Gary Cope, have to say "While the preliminary metallurgical results are not idea for the Boleras Main Zone, the comparisons between Sandra Escobar geology and that of the neighboring La Pitarrilla project are encouraging"

So how bad is it?

Single word - Extremely, but let us be a bit more scientific. Here are the preliminary results:

They've given us some nice charts to show us visually how crap the recovery is. I've added a couple of notes to show you the recovery for average grade ore.

So at the average grade of the deposit less than 20% of the silver can be recovered.

Basically it means for every tonne they mine only 19 grams gets recovered and just 87 grams goes to make the richest silver tailings in Mexico.

Or, they can only recover 6.7Moz of the 33.3Moz Ag resource they've defined.

But, I hear you telling me, they get some decent recoveries for the high grade ore!!! 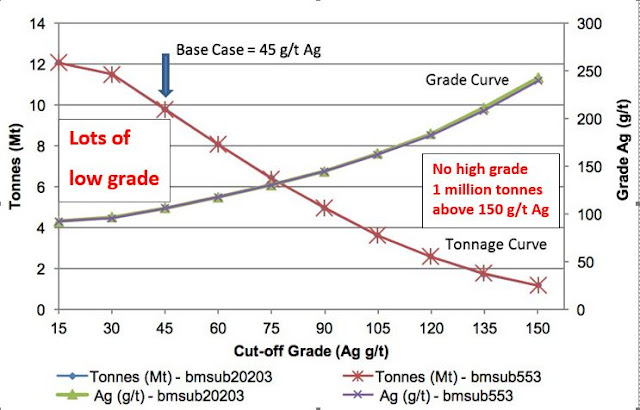 But they have no high grade ore..

What a heap of crap, but it was nice to know that Orex waited for the results from the metallurgical studies before commiting more money to the project (link and link.

Ohh, they drilled an additional 3,000 meters and committed to drill another 4,000 more. Well I'm sure that Orex's shareholders will be very happy that you've spent another couple of million bucks on an uneconomic silver project.

The frustrating thing is - poor metallurgical recoveries are a common feature for many disseminated silver deposits.

Congratulations, I hope you have a plan B, especially as you didn't take an opportunity to raise money back when your share price was touching $1.40.

just a quick update, this is how Proactive Investors UK reported the data from Sandra


Posted by The Angry Geologist at 8:27 AM