Calibre Mining (link) reported some excellent drill results from their Cerro Aeropuerto prospect that they returned wide high grade gold mineralisation and to quote them directly:
Highlights
But if we look at the accompanying drill-hole intercept table we see: 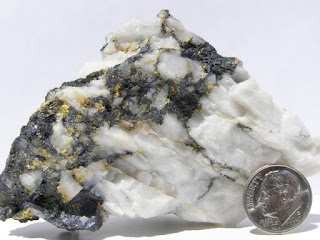 So they reported that they drilled a think zone with some good gold numbers, but I don;t think that we are being shown the whole story, and there are a few clues if we dig a bit deeper:
So we put that together and the evidence suggests that most of the gold is actually in narrow, high grade veins. Often companies use uncut assays as a way to increase the average grade of the mineralisation, to make it look as big/wide as possible, is that happening here?
So I took the gold intercepts from the March 22nd press release and associated maps and figures, typed in as much of the drill-hole data as possible, I created 2 tables:

This what the intercepts look like from Calibre press release table. A series of wide gold intercepts that appear to suggest that the gold zone is very continuous and gold grades increase with depth. 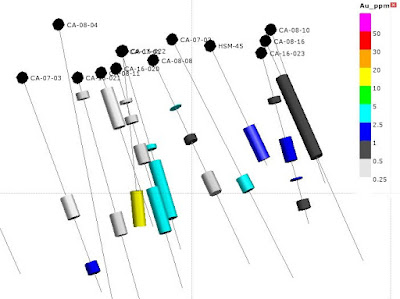 Potentially this zone could be amenable to bulk mining, but if we start to separate out the narrow high grade zones from the rest of the intercepts, this is what you see: 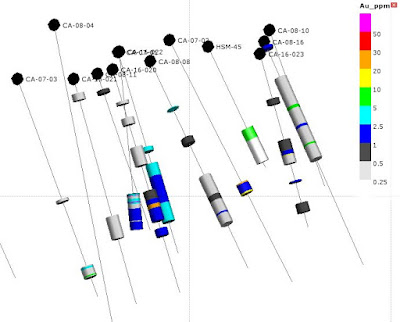 Those wide zones of >1g/t and >2.5 g/t Au suddenly disappear. They are replaced by narrower, high grade intervals that are surrounded by wide zones of low grade (<0.5 g/t) mineralisation.


Please note: there are still a few holes that still show thick zones of good mineralisation. These were drilled by Yamana Gold in 2007/8 and I have only been able to find summary assay tables from them. I feel that they will also show a similar pattern to the recent, with narrow bonanza-grade veins with a low grade halo.
Why don't we take a closer at drill-hole 022, with headline leading 10.47g/t Au over 53.7m, do we see any changes? 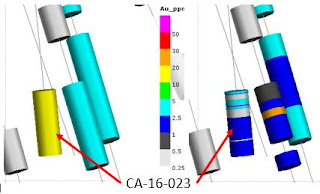 The headline grabbing 53.7m at 10 g/t Au disappears when we strip out the effect from the narrow high grade zones, we see that in reality we don't have a single thick gold zone, but 2 narrow bonanza grade veins surrounded by a lower grade mineralisation.
This means that these 2 narrow zone, with a combined core length of just 1.64m (i.e. equal to the height of Scarlett Johansson or Natalie Portman) out of a reported length of 53.7m contain 84% of the gold.

I haven't visited the property and the only drill-core I have seen is in photos accompanying the press releases. Here is the high grade interval from hole 022 and the corresponding section through the deposit. 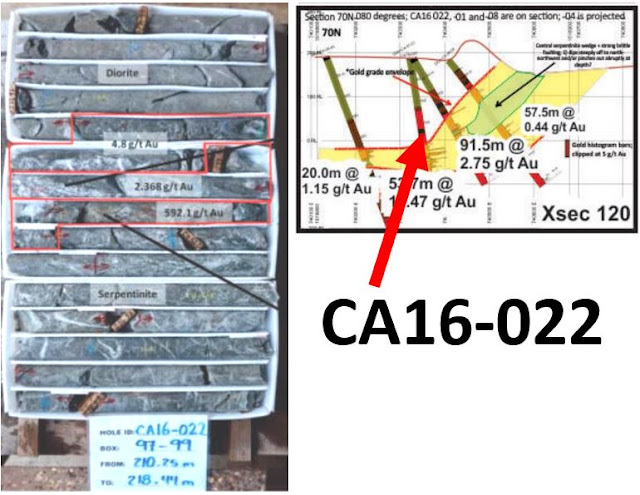 We can see that the hole has been drilled at a -80 angle of dip (close to vertical), and if we rotate the photo of the core so it is also orientated at 80 degrees, this is what we get. 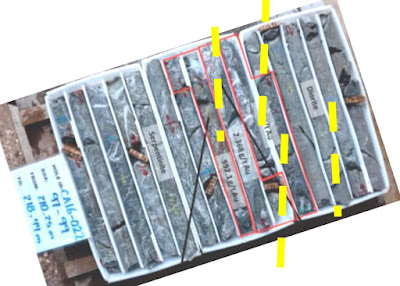 I've drawn on a few lines in yellow that look like contacts and trends within the vein and they suggest that the vein could be vertical, yet when we look at the cross section above, the gold zone is drawn as being more horizontal in attitude.

My gut feel is that the drilling has intersected a series of narrow, high grade, close to vertical veins surrounded by a wide-ish zone of low grade mineralisation. Something more like this:

The big question will be, are there enough of the high grade veins to allow Calibre and Centerra define a bulk tonnage deposit, or is there good potential to define a smaller, high grade zone?

Posted by The Angry Geologist at 6:46 PM