I've been wanting to compile the data for Westhaven's Shovelnose deposit for some time. They keep publishing decent grades and thicknesses (link, link and link), and I wanted to see how the data holds together.

Shovelnose is a good exploration story. Work commenced on the property in 2011. In 2016, drilling identified low-grade disseminated mineralization in silicified rhyolites in the Alpine and Tower zones. It was recognized that this could be the upper part of a high-grade epithermal system, which was discovered in 2018.

So, using the previous post on epithermal deposits as a guide, we'll look at the the data to see: 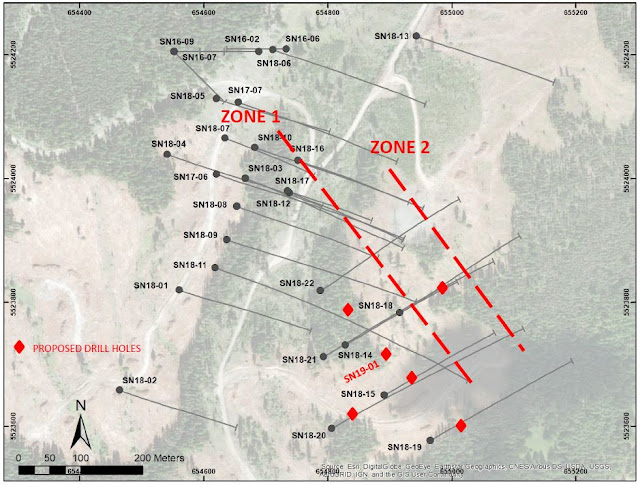 Westhaven tell us that they have 2 principal veins and maybe splay, but when you put the data in 3D, the picture becomes more complicated.


However, if you look at the silver, it appears to be restricted to the core of the mineralized structures.

From this I've created a series of veins. It is quite complicated, there are many ways that you can join the dots, but we can see 2 principal structures and several splays and parallel veins.


We can also see that the thickest and highest grades appear where one of the splays intersects the main vein.

Note: My elevations are based on the Government of Canada 50K topomaps (link), and will vary by a few meters from Westhaven's surveyed drill-holes and collars

We know that in LS-Epithermal deposits, the good grade mineralization is restricted to a quite a tight vertical range. In earlier presentations (link), they used to include this slide:


According to their geologists, the decent Au mineralization is found over a ~100m vertical range, from 1250 to 1150, which isn't very special, but with the power of excel, I disagree with them: 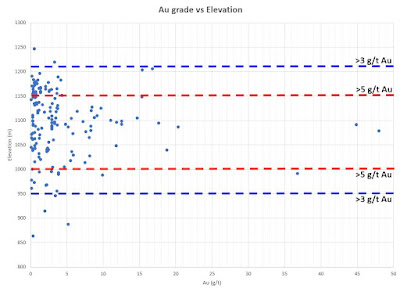 So we have a 250m apparent vertical extent to mineralization. Not bad 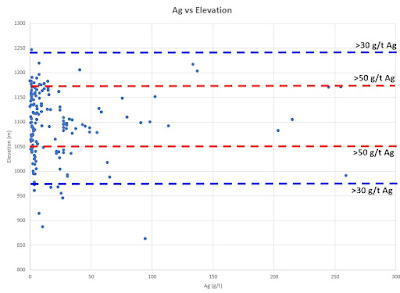 We see a similar distribution for silver.

I've broken out the horizontal extents by the two principal veins. We want to the extent of the >3 g/t mineralization and if there are any high-grade (>5 g/t Au) zones that are can be extended or infilled (hot holes drive share-prices) 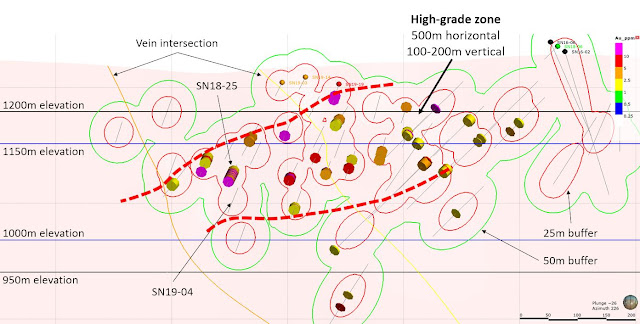 We can see that the majority of the >2.5 g/t samples fall within a specific area that appears to have a 500m horizontal extent and a 100-200m vertical extent.

We can see that the down-dip extension to mineralization appears to be open, but you can see how variable the grades are, we have several holes that hit minimal Au adjacent to hole SN18-25. 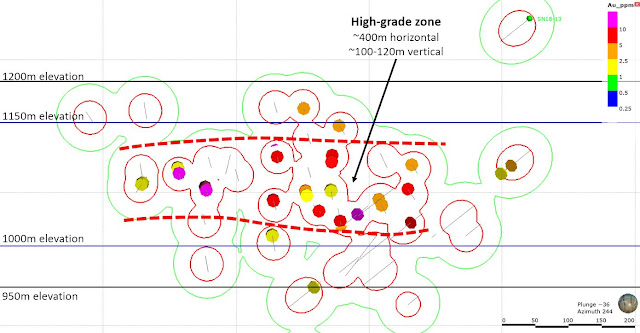 On the second vein we see that the >2.5 g/t zone extends for at least 400m along strike and a 100-120m vertical extent. We can see that the zone appears to be open along strike, so there is good potential to extend this zone. We also see a consistent zone of >5 g/t Au mineralization (~150m x 120m) in the center of the vein.

So far Westhaven have discovered a decent epithernal system, with 2 principal veins with a couple of reasonable sized zones of mineralization. From the long sections we can see that the high-grade (>2.5 g/t Au) zones are well drilled (~50m drill-hole spacing), and the lateral extents appear to limited.

So, where do Westhaven go now? They could continue drilling the known areas and pumping out PRs with decent intercepts, but after a while they'll need to come up with a resource, and from my back of the envelope calculations the current drilling have defined around ~700Kt (assuming an average 2m vein width), which isn't enormous.

Therefore, it is nice to see that Westhaven are looking for new areas (link) to explore to build on their initial discoveries to see if they can find new veins and get the project big enough to attract interest from bigger companies.

You can get my 3D model from here (link)

Posted by The Angry Geologist at 12:05 PM