I've been bashing Brucejack frequently over the 'difference' been mine grade and reserve grade, and with the release of the update resource and resource statement, I decided to look at how the reserves and resources have changed overtime (just for the VoK):

Note: I've added dashed lines to the charts where data is missing (the Dec 2016 resource press release didn't include information for M&I and inferred resources). 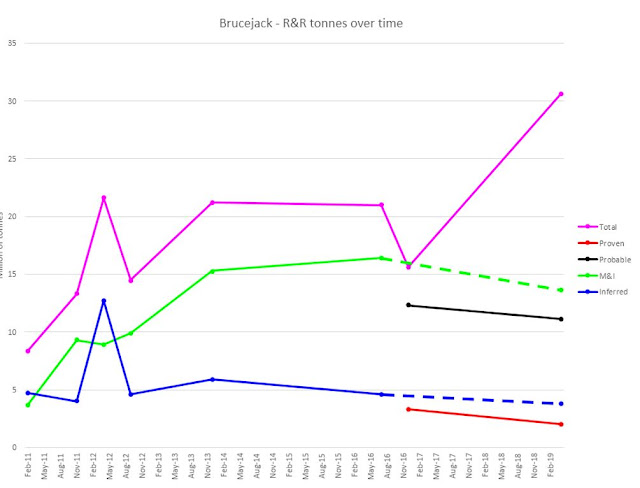 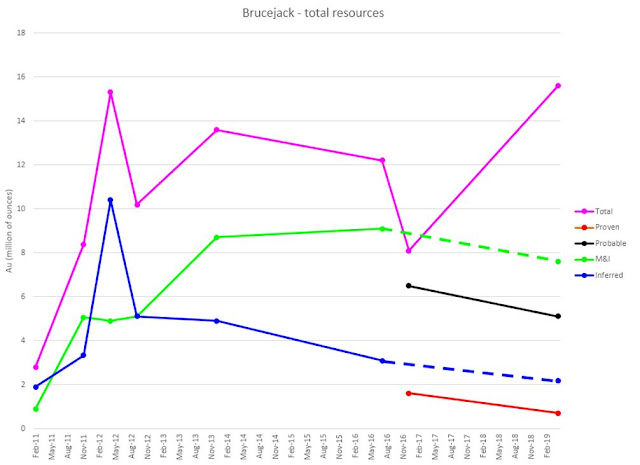 Ounces have stayed relatively flt over time, we had very large growth in resources from 2011 to mid-2012, then the focus has been on improving the quality of the resources (from Inferred to Measured and indicated) and to reserves in 2016. 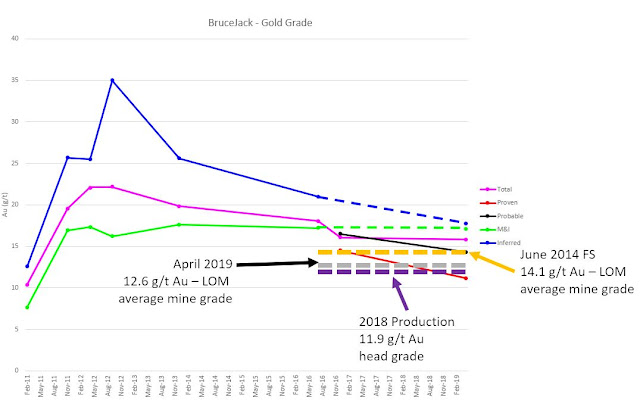 I've added a lines for the Life of mine (LOM) mine grades in the 2014 Feasibility Study (FS - orange line) and the new 2019 proposed mine grade (purple line), and one for the 2018 actual mine head grade (grey dashed line).


Obviously the reserve and resource grades have dropped because of all the high-grade mineralization mined in 2018......


You will see that in many 43-101 reports the Inferred resources typically higher grade than the other resource categories, they are normally based on the lowest quality data (relatively speaking), the widest spaced drill-holes and can be heavily skewed by a few ultra high-grade holes. However, it is surprising that the grade of the inferred resources have fallen by such a large amount.

This figure was also interesting in the press release:

There was a lot of technical crap in the section accompanying this table, but in I think it means they mined 20% more material than planned, now this will be interesting to see going forward, especially with the mine being expanded to 3800 tonnes per day.

Brucejack produces a lot of gold, but it keeps falling short.

Data for these charts came from:

Posted by The Angry Geologist at 9:41 PM