Someone asked me to look at Serengeti's Kerwanka project in BC.

You have to give credit, Serengeti's team have been hard at pounding the the bald-headed moose, cranking the shank, and feeling their way around Kerwanka.


However, the problem with dancing with the one-eyed driller is that once in a while you have to consulting with your silent partner to see if the project is good enough for a one gun salute.

So why don't we stop serenading Mrs. Palmer and her five daughters by letting go of the one-stringed guitar and have a look:


Wow, the open pit resources are terrible and the the underground "resources" are just a Cu(m) stain. 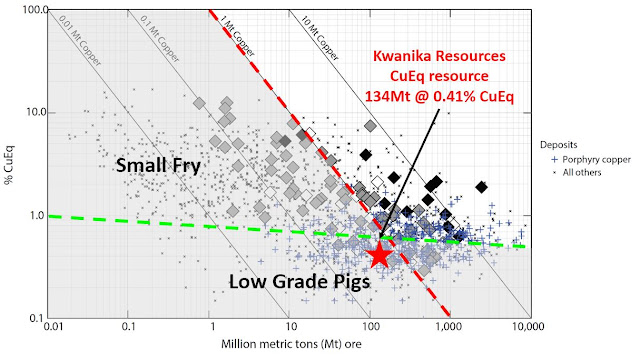 So basically, they could define >10 billion tonnes at a similar grade and it would still be too shit to put into production.

For amusement, here is the Kerwanka underground resource plotted against the mighty proposed block cave operations


So basically, all that hard work milking the moose, fly fishing and hoisting the petard still means that the project is crap. That's enough to make the the bald man cry


Posted by The Angry Geologist at 8:53 PM