Arizona mining did want to drill in the public land, but unfortunately their recent application for 8 holes was cancelled (link), and they have another permit for 5-6 exploration holes that are on-hold.

You can download the entire permit application and maps from here (link).

Correction: the permit for the 5-6 exploration holes that are on hold are actually for Regal Resources' Sunnyside project.

I incorrectly assumed that Arizona still had an option on these concessions. I apologize for that, and thank you to LM for correcting me, and I've also copied his excellent comment, who is following Arizona mining much more closely than I am able to do.

The drilling application was actually cancelled by the company itself, because the Forest Service indicated they would require at minimum an Environmental Assessment which is like an 18 month process. And in the end apparently the application had already been downsized to just 2 drill platforms totaling less than an acre of disturbance, which is tiny in the scheme of exploration on forest land. So instead, the company withdrew the application and is now supposedly planning a much larger drill program on the public land to be announced sometime in 2017, hoping I guess that under Trump the Forest Service will ignore the established molasses-pace process and fast-track approve the new drilling to commence shortly over the objections of the local majority. In the meanwhile, said locals continue coming up with new material to defeat mining in this area including the recent appearance of several jaguars including possibly a female, which are the first ones to have been observed in the U.S. in decades. So best case is still about 10 years for permitting. A good example might be the Montenore and Rock Creek projects in Montana (both now owned by Hecla) which are about 15 years into the process. Of course the most direct comparable is Rosemont which has dragged along in final permitting purgatory for a staggering 6 years.

I would recommend you to read their summary on the permitting process at Taylor/Hermosa. It has a very pro-environment stance (i.e. very anti-mining), but the important thing to note their passion and desire to fight to stop any mining (or activities related to mining) in the area. Unfortunately, in mining we can't copy what Disaster Area's management did - you'll have to look up that reference yourselves.

What do Arizona Mining say in their presentation about permitting at Taylor?
So, they can only explore 2% of the property, and have a organisation fighting to prevent any mining in the Patagonia area. Fortunately, several more advanced projects (Resolution, Rosemont) in the state have spent several years in permitting purgatory, but screw permitting, let us get back to geology, let us have a look at the Sweet, Juicy Taylor D(eep) zone. Here it is in its magnificence.

This is the map in the press release


This map shows where the drill-holes have hit the Taylor deep zone, which sits 950-1450m below surface. This is what it looks like in 3D. 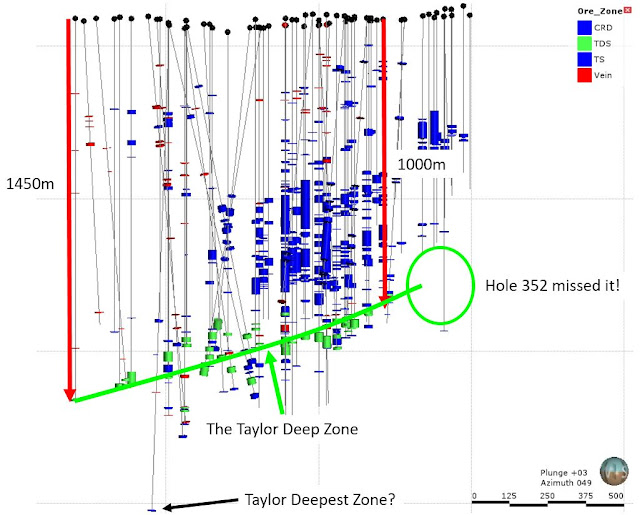 We can see that the Deep zone is very deep, 1000-1450m below surface, there was some mention in the PR that it could come closer to surface, but unfortunately drill-hole 352 doesn't appeared to hit any mineralization where the TDS continues to the SE.

Let us take a close look:

We see again that the high grade zinc zones are actually quite narrow (3-5m), and a bit scatty, but as they say - all news is good news.

Posted by The Angry Geologist at 7:18 AM